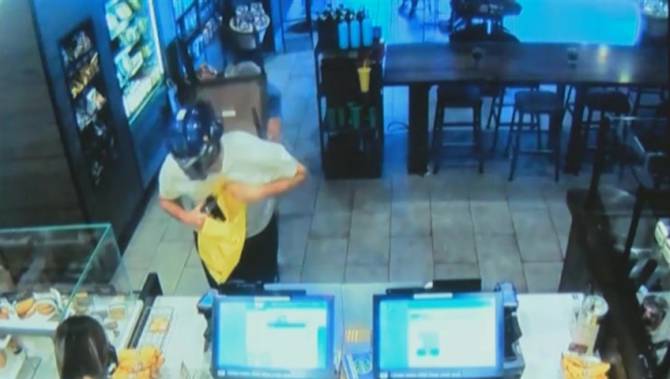 I’ve never actually been witness to anyone holding up a restaurant/any kind of shop I was in, but I seriously doubt that if I was, I would have the balls to step up and do anything about it.

Not so for this 58-year-old man who was visiting his local Starbucks in Fresno, California when a guy ran in wearing an Optimus Prime mask armed with a gun and a knife. Undeterred, Cregg Jerri grabbed his chair and whacked the robber over the head with it to try and foil the robbery.

The two then wrestled on the floor for a bit which led to Jerri being stabbed in the neck before the Transformer made his getaway:

Brave move from Jerri there. You’ll be pleased to hear that despite being stabbed in the neck, his wounds were pretty easy to sort out and he’s already been discharged from hospital.

The suspect on the other hand was picked up a few blocks from the coffee shop and taken to hospital with multiple stab wounds and is now recovering in a serious but stable condition. He was identified as 30-year-old Ryan Michael Flores, which kind of makes the robbery attempt even more pathetic, as he was soundly beaten up by a man more than twice his age. Better luck next time.