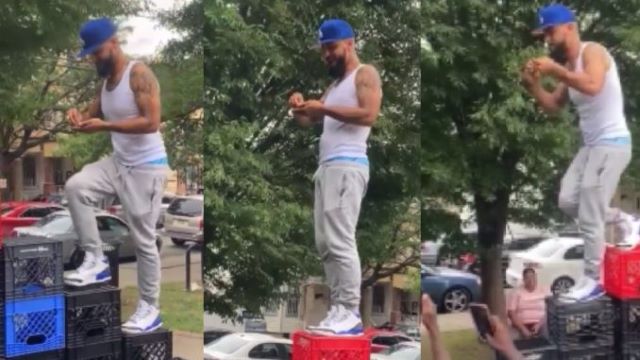 It looks like the #MilkCrateChallenge might be over almost as soon as it got started after a guy named White Mike managed to pull off an unfathomable feat – completing the challenge while rolling a blunt at the same time.

A man by the name of White Mike has set a new world record, being the 1st person to complete the Milk Crate Challenge while rolling a blunt🤯🥇 pic.twitter.com/V4RdzAWRhd

Unbelievable. So many have tried and failed to climb the mountain of milk crates and come down unscathed. White Mike not only beat it, but did so with ease while rolling himself a fat celebration blunt. His foot placement was absolutely perfect. And to do all that with a bunch of people hollering around him and with the added pressure of knowing that if he slipped it was immediately going viral on the internet? That’s nothing short of commendable, in my view.

Unfortunately for White Mike, he also tried and failed a crazier milk crate stunt on the same day…

“Niggas Look Like The Top Of A Wedding Cake” Got It 😭😭😭😭😭😭😭😭😭😭😭😭😭😭😭 #MilkCrate #Challenge #WeddingCake #Crates #MilkCrateChallenge #Funny pic.twitter.com/HPdR4NCZNj

Can’t win ’em all. Although after initially completing the challenge while rolling a blunt, I don’t blame White Mike for thinking he can do anything he puts his mind to. What a legend.