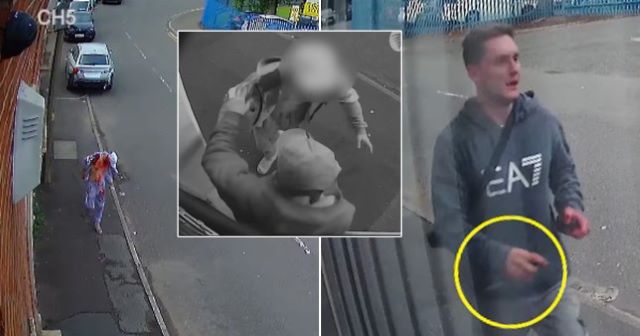 A 35-year-old Blackburn man has miraculously survived after being slashed and stabbed several times in an unprovoked attack carried out by his own friend, who robbed him before fleeing.

As seen in the clip released by Lancashire police, knifeman Lindsay Harkin, 29, sprints away from the scene on Lower Hollin Bank Street in Blackburn. His victim then emerges, with his bare chest and jogging bottoms covered in blood:

A man has been jailed for 9 years after slitting his friend’s throat & stabbing him multiple times with a knife.

A 999 call then followed in which the victim can be heard panicking in the background:

During the frantic 999 call that you hear in this video, the victim can be heard shouting in the background that he was going to die.

The aftermath of the offence, which happened on Lower Hollin Bank Street, Blackburn, was captured on CCTV from a property & was used as evidence. pic.twitter.com/MzYUSIJoF1

Harkin was sentenced to nine years in jail after pleading guilty to section 18 wounding, robbery and possession of a bladed article. He had slashed his friend’s throat and stabbed him in the back multiple times.

The good news is that the victim survived, albeit with multiple ‘serious injuries’. What I don’t understand is how this isn’t an attempted murder charge, because with a 9 year sentence and good behaviour this guy will be back out in 4-5 years. I’m all for offender rehabilitation, but come on. We’re talking about seriously horrific and evil behaviour here, completely unprovoked and carried out against a friend of his. What a relief they got on so well – imagine what he would have done if he didn’t like him!

Oh well, guess we should be relieved he’s off the streets… for now.

For the teenager arrested for stabbing a rival to death at a knife awareness course, click HERE. You couldn’t make it up.