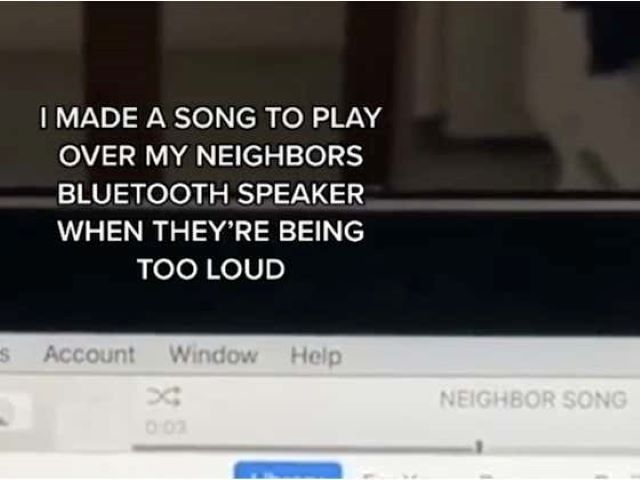 An absolute genius named Matt O’Brien has devised the perfect way to let his neighbours know their music is too loud.

Beautiful, just beautiful. Imagine the shock and awe felt by his neighbour just blasting out some tunes without a care in the world, only to suddenly have his bluetooth hacked and overrun with a jingle about how annoyingly loud his music is. To the tune of the Alton Towers theme song, no less! Also known as Edvard Grieg’s ‘In the Hall of the Mountain King’…

How does Matt’s neighbour come back from this? It’s simple – he can’t. He’s cowering under a table in the corner of his room too terrified to ever play loud music ever again.

Big up Matt and let this be a lesson to the rest of us p*ssies who would have probably just made a polite request to the neighbour to turn their music down and been completely ignored. We’d rather just carry on living a miserable existence and have the neighbour ruin our lives with his crappy music rather than confront them or make any bold attempt to resolve the issue. What Matt did was come up with an ingenious and creative way to shock the neighbour into submission and have some fun with it in the process. Well played, Matt. Well played indeed! It’s headphones or nothing for this neighbour from now on.

For the dude who caught his neighbour filming NSFW OnlyFans content by the swimming pool and decided to treat himself to a free show, click HERE.