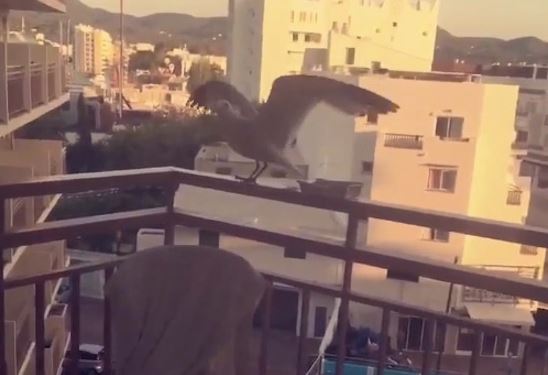 We’ve heard of people feeding seagulls laxatives, but KETAMINE? No wonder this guy is getting death threats over Twitter.

Some guy named Josh Greenwood from Huddersfield uploaded this video the other day in which he’s seen adding ‘KETchup’ to a chip that he leaves on the balcony for his mate Sally the Seagull.

It’s not long before the seagull swoops in and collects his munch, complete with ket sprinkled on top:

Pretty cruel thing to do really, and pretty dumb uploading it online as people were soon sending Josh death threats over the stunt. He’s now saying it wasn’t really ketamine, but salt.

My mate put salt on a chip and seagull ate it while I filmed. It’s called a joke. I have my mother on Twitter, do you think I would publicly post something like that if it was what it’s made to be? It’s called sarcasm! Making a joke out of it because of people like you overreacting to something that wasn’t even what it was made out to be.

If you give something to a baby, for example, the effects would be devastating and a gull is smaller than a baby. Ketamine could lead to muscle paralysis, causing it to crash out of the sky which could cause it to break a leg or wing. It could cause loss of consciousness. It could fly into a car causing a road traffic accident, and the drug can cause bladder problems, all of which could cause long term effects on a bird.

So obviously completely out of order from Josh here but at the same time how do we know the seagull didn’t already have a ket problem? We’re talking about an Ibiza seagull after all. Not saying what the guy did was in any way acceptable but just because he enabled the seagull doesn’t mean the seagull HAD to take the ketamine. Come on Sally the Seagull, learn how to say no one time. Maybe she’ll snap out of it once she reads the story Badger told us.