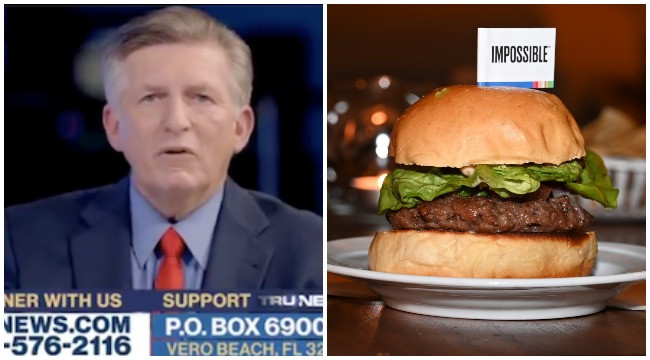 However annoyed or ticked off you are about the current vegan revolution that seems to be occurring in Western civilisation, I think we can all agree that it isn’t actually a Satanic plot that has been hatched in an attempt to inherently change human DNA, right?

Wrong. This is the byline that radio host and founder of TruNews Rick Wiles is towing and you can see him go to town on the Impossible Burger and why it’s trying to destroy the human race in the video below. It’s something else, believe me:

Rick Wiles is warning you not to eat an Impossible Burger because they are part of a satanic plot to change human DNA and “create a race of soulless creatures on this planet.” pic.twitter.com/1w2ffOWcAP

I mean sometimes when someone has an opinion so starkly different to everyone else in the world, I do step back and think ‘maybe this guy might have a point and we have all been brainwashed by X Y or Z and conditioned not to believe it’. This is not one of those times, or if it is then the powers that be couldn’t have picked a bigger idiot to stand against them to completely undermine any attempted backlash for being ridiculous stupid. What an absolute meathead.

This guy is just the poster child for religious idiots, saying that a plant based burger isn’t natural and is affecting God’s great plan. You’ve often gotta wonder how people like this exist to get so offended by everything in the world just because it’s a bit different to what they were taught growing up. Stop being an idiot and read something that isn’t the Bible Wiles. Seriously.

For more of the same, check out the Impossible Burger at Burger King. Watch out for your DNA though.