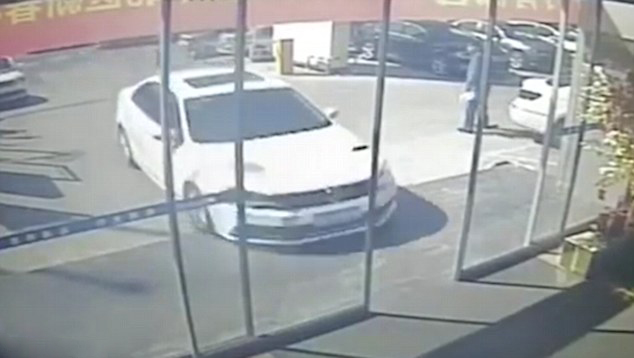 When you realise you’ve just been ripped off massively.

This video out of China shows the moment an angry car owner drove his white Volkswagen through the front of a dealership and completely wrecked the place.

Apparently the man, known as Mr. Bai, was unhappy with the deal on his recent purchase.

Following the crash, he exits the vehicle and shouts:

Your staff came to threaten me at my house and threatened my family members. I don’t want to live anymore.

I called you. I didn’t want to hurt anyone. I just wanted to ruin your reputation. They gave me a deadline and told me to withdraw my complaint.

I didn’t withdraw my complaint and they came to threaten me at my home. They said they would get ten people to rape my wife.

Well, Mr. Bai isn’t the first person who’s wanted to smash their car through a car dealership, but he’s one of the few who’s actually done it. Honestly I kinda see where he’s coming from. If you’re terrible at negotiating car deals, the salesman can smell that on you a mile away. They know that you want a new car but have no idea how to haggle on prices. You leave the dealership in your new car but can’t shake the feeling that you’ve been totally screwed. Some people just live with it but others, like Mr. Bai, drive right back down to the dealership and get even (well, not really even but you know what I mean).

To read about the man who crashed his car into a wall because he thought he was entering a time portal, click HERE.