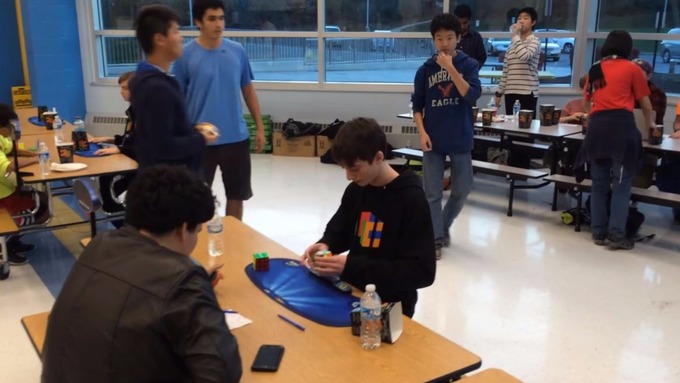 This kid just became the Justin Bieber of nerds after solving a Rubik’s Cube in 4.9 seconds.

14-year-old Lucas Etter solved the Rubik’s Cube in just 4.90 seconds over the weekend, breaking the previous record of 5.25 seconds which was set back in April.

As you might imagine this was a huge cause for celebration among the nerds in attendance:

Instant superstar status. There’s no doubt this kid is the king of nerds right now. One minute he’s just a regular nerd and the next he’s practically the Justin Bieber of nerds. And all it took was 4.90 seconds of brilliance.

Only advice I’m going to give Lucas is to not let the fame get to his head. There were LOADS of people coming up to him and kissing his arse after he broke the record. Not all those kids are your real friends, Lucas. They just want to come along for the ride now that you’re a star but you know the second someone else breaks your Rubik’s Cube record, and it’ll happen one day, you’re on your own again. Left to reminisce on Rubik’s Cube superstardom of days gone by. Stay humble, is basically what I’m getting at.