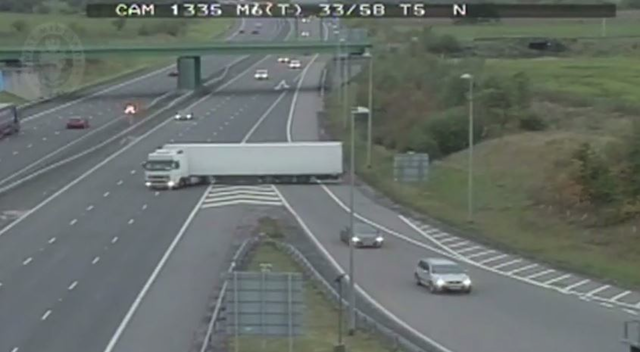 No prizes for guessing who wins the idiot of the week this time.

Well this has to be one of the most idiotic and downright dumb manoeuvres I’ve ever seen anyone try to pull, even stupider than when this group of bell ends managed to crash their speed boat in the dumbest way possible. Just what the hell was this guy thinking as he tried to pull off a U turn on the M6 in a fucking lorry?

Leonid Papachin had got himself into this predicament by driving down a slip road the wrong way. This is completely stupid in the first place, but his solution of performing a U turn on a motorway so he was going the right way was perhaps the pinnacle of stupidity.

As a result he’s been handed a two year suspended sentence, been suspended from driving for 18 months and ordered to pay £85 costs. Not the worst punishment sure, but pretty hefty. It’s good to finally see stupidity get the punishment it deserves.

Here’s what motorway patrol manager Jed White had to say about it:

Unfortunately this type of incident is all too common on the motorway network, especially the M6 Toll, where drivers attempt to avoid charges for using the road. On this occasion the driver should have contacted motorway police immediately to help him manoeuvre safely.

We will always prosecute offenders and, as this case demonstrates, the penalties can be quite severe. Our CCTV systems cover the majority of carriageways and are monitored 24/7, so there is no hiding place.

I hope that it serves as a deterrent to anyone who thinks they can put other motorists in jeopardy by ignoring motorway regulations.

Come one Jed, pull the other one – there’s no way that this happens all the time is there? Still, it’s good to see this footage being released and the punishment made clear so that if anyone out there is as retarded as this Leonid guy then they might think twice about trying to do something as stupid as this.

Unfortunately chances are if they’re even thinking about it they’re probably just going to do it anyway. Dumbasses.