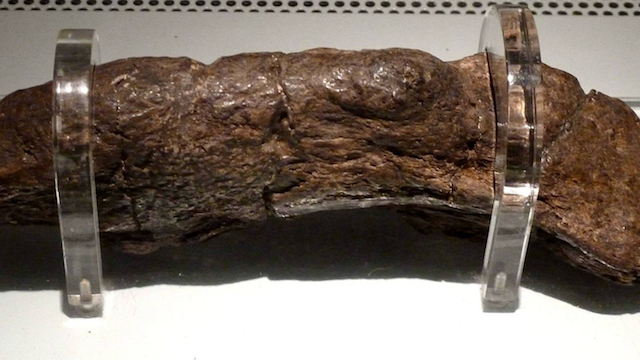 I’m sure all of us have looked back at the toilet at one point in our lives and thought how the hell did that manage to come out of my ass – and how the hell does it smell so bad? – but it turns out that we haven’t got anything on the longest known human poo which belongs to a 9th century viking.

The piece of crap is apparently so valuable that it’s revered with the same esteem as the British Crown Jewels and is housed in York’s Archaeological Resource Centre on display for visitors to marvel at as well. It’s known as the Lloyd’s Bank Coprolite and it’s a human turd that dates back to some viking from the 9th century, discovered when the York Archaeological Trust were excavating an area that eventually became a Lloyd’s Bank, hence the name.

The giant turd is 20cm long and 5cm wide which is almost unfathomable when you think of it coming out of somebody’s ass. Especially when it’s fully intact as well, although I’m sure some of us out there will have claimed to have pushed something bigger out of their butthole. If you think that’s true, make sure you measure it next time tough guy!

If you want any top tips about how to achieve this feat, researchers have been able to determine that the viking was mostly surviving on a diet of meat and bread. They also found a whole bunch of parasites in the dried shit, indicating that the guy hadn’t managed to take a dump in a few days which is why this one ended up being so massive.

Sounds like it might be a bit of an effort to try and match/beat this guy but I’m sure someone out there is up to the challenge. Come on.

For more of the same, check out this jogger pooping on the street then being forced to carry it with his bare hands. Embarrassing.