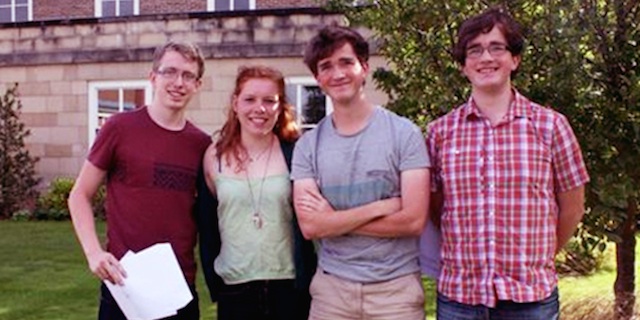 Thank God they realised they were related.

Back in 1999, it was the last time that siblings Josephine Egberts and her brother, Erik de Vrie saw each other, after their parents got divorced and Erik and his twin brother Maarten moved to Belgium with their father. Josephine remained in The Netherlands with her mother.

As often happens in these situations the pair lost touch as they were still very young and this was a time where most people probably still had dial up and were using MSN Messenger to stay in touch long distance. As 4 and 6 year olds, it probably became a bit too hard for them to utilise these methods of communication (their parents were probably using the phone a lot) and so they unfortunately lost contact.

Fast forward to earlier this year, where Erik – who has been living back in The Netherlands since 2008 to study – decided to download Tinder for his smartphone. As he was flicking through girls he came across Josephine and matched her – he obviously had no idea that they were related because Tinder doesn’t show your last name and he hadn’t seen her for 16 years.

The pair got talking and Erik had the nagging feeling that Josephine seemed familiar but couldn’t quite place it. The penny dropped when the two met up for a drink in Tilburg though with Josephine explaining:

When I saw him, it was suddenly very clear. It was so special to see my own blood brother again after 16 years.

Obviously (at least I hope) the pair abandoned their romantic relationship and are now rebuilding their sibling relationship, along with twin brother Maarten. All of them are pictured above.

Tinder though will never be the same because basically this could potentially happen to you and the consequences could be way worse. What if you had a long lost sibling you didn’t know about and went down this path with them? It doesn’t bear thinking about.

Back to these two though and firstly, it’s kind of creepy that they discovered each other’s existence through the fact that they both thought the other was hot on a dating app. I mean we all know that Tinder is pretty much just looking at pictures and giving them a thumbs up or a thumbs down so that only means one thing – they both superficially have the hots for each other. Nobody is gonna buy that they liked what each other said in their profile, because honesty who reads that crap? This is surely going to make things pretty awkward between them in the future.

Continuing on this tangent, imagine if they HADN’T realised their connection? I don’t even want to think about it. It might not have been as bad as the worst Tinder date ever but chances are it would probably have been worse. Way worse. Don’t even think about where that can go, seriously.

And most bizarrely of all, why are they proud of this and telling people about it? Is this going to be a story they’re going to reel out at family events over the years?

I know the Dutch are weird but geez, come on guys, this really isn’t that cool.