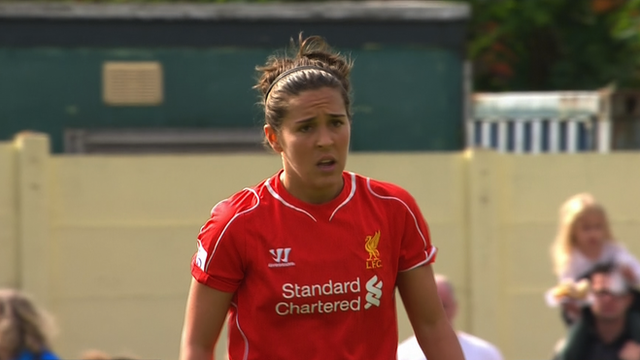 Whatever you say about women’s football, you never see anything like this in the Premier League.

Women’s football is constantly facing an uphill battle to be accepted as much as the men’s game and that’s mainly because the standard is just so much lower it’s nowhere near as exciting. Sorry ladies but that is true, you’ve got to admit.

However having said that you don’t see anything like this passage of play in the Premiership, although it probably does occur solely because girls are pretty shit at football in general. It went down in a match between Liverpool and Birmingham over the weekend where towards the end of the game a calamitous error from the Liverpool goalkeeper led to Birmingham midfielder Hannah Keryakoplis hitting a 40 yard lob into an empty net.

How to respond to this? Easy – midfielder Fara Williams receives the ball at kick off and immediately hits a fifty yard lob over the stranded Birmingham keeper. Of course there are going to be some questions over whether the goal should have stood as it doesn’t really seem like the Birmingham players were ready when the kick off was taken – as well as just her general positioning – but with passages of play as entreatingly dumb as this maybe it’s only a matter of time before the women’s game starts to rival the men’s?