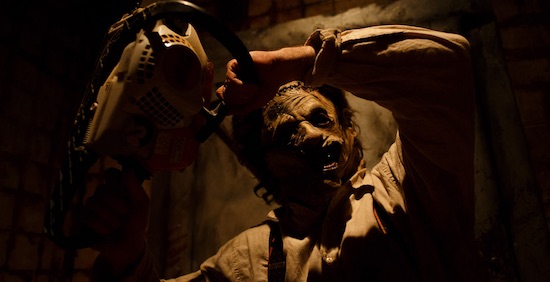 The Texas Chainsaw Massacre and its villain Leatherface is one of the most iconic horror stories in history, so it makes sense that Hollywood would try and rinse the franchise as much as possible.

Since the original classic, we’ve already had a reboot, three official sequels, a prequel to the reboot and one movie that claims to be a direct sequel to the original, and now it’s finally time for an origin story in the appropriately titled ‘Leatherface’. The film follows the early days of the skin wearing psychopath, as the youngest child in the mysterious Sawyer family is committed to a mental institution following an unusual incident that leaves the sheriff’s daughter dead.

Ten years later and he manages to escape with three other inmates and a young nurse held hostage. From then, the chase is on as he heads out on a violent road trip from hell, all the while being pursued by the sheriff who is desperate for revenge. This is how he became Leatherface:

I mean that didn’t really tell us anything about the movie really did it, other than that it’s going to be really intense, really violent and really brutal. To be honest, that’s probably all I really need from the trailer to convince me to watch it, so I guess it’s job done.

Also funny to see that Stephen Dorff has been reduced to playing an evil redneck sheriff in a movie like this, which is pretty much going to be straight to video amazingly. How the mighty have fallen. It’s out on DirectTV on September 21st with a limited theatrical release to follow. Gotta try and catch it at the cinema.

For more Leatherface, check out these horror movie pinatas. Perfect for your kids’ birthday party.