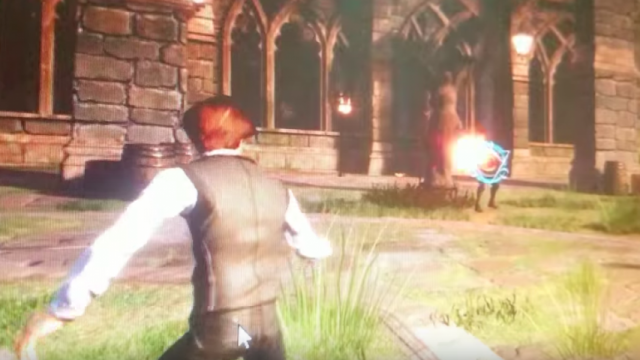 Whilst we’re all buzzing over the upcoming release of Red Dead Redemption 2, leaked footage of another rumoured open world RPG has got us all amped up yet again.

The footage comes courtesy of a Redditor named VapeThisBro – cool name dude – who says he secretly recorded the footage and nobody knows about it except a small contingent of people who were shown it. He also reckons he managed to exit the building before signing the NDA, which is why he’s been able to post it online.

Here’s a look at the trailer, along with a fairly detailed description below:

Set in the 19th Century (1800’s) Wizarding World, this 3rd person open-world action RPG game centers around your character with unique abilities who has eared a late acceptance to Hogwarts School of Witchcraft and Wizardry. You are a newly arrived 5th year student to Hogwarts that demonstrates a latent gift for magic with a unique ability to track and identify remnants of a pottant ancient power.

Upon arrival, strange events begin to materialize In the Forbidden Forrest and trouble begins o brew within the castle walls. Together with Professor Elezar Fig, you embark on a journey through both familiar and never before seen locations to bring to light the truth behind these mysterious occurrences.

On your quest you will craft potions, master new spells, and discover fantastical beasts. You will battle Dark Wizards, Goblins, and other supernatural enemies and uncover the truth about your destiny – the Fate of the Wizarding World lies in your hands.

I mean that does sound and look decent does it and I doubt that anyone would go to such lengths just to prank people on the internet and get their hopes up with that video? Would they?

EDIT – looks like Warner Bros have blocked the video so there definitely is something going on. Sorry if you didn’t get to see it in time, but chances are it’ll be showing you some clips in about six months so you’ve got that to look forward to at least. You’ve gotta be quick.

For more Harry Potter, check out the English subtitles in the Chinese version of Harry Potter. Very funny.