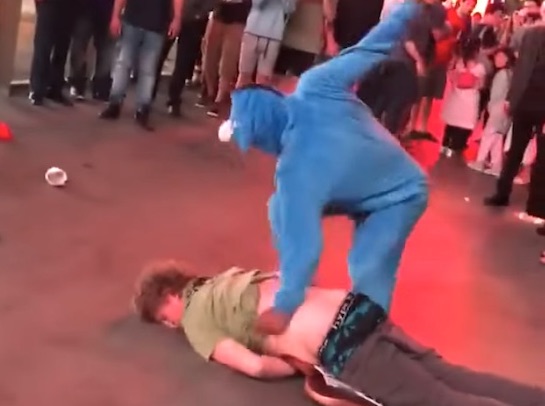 You can imagine that the street performing community is relatively tight knit, and there’s probably a shit load of beef between some members of it as well – at least this video implies there is.

The video starts off with a guy in an Eeyore costume squaring up to a guy with a guitar and both of them seem pissed off with each other. Some girl comes in and then accuses Eeyore of rape, whilst he fires back and says she drugged him and stole everything he owned.

Pretty dirty allegations right there, but Eeyore and guitar guy aren’t really that bothered about getting to the bottom of the situation and are soon kicking lumps out of each other, with a particularly brutal knockout coming courtesy of Eeyore about 30 seconds in to the fight. Also watch out for the guy shouting ‘World Star’ then dropping his camera phone down when they look over because he’s too scared of them… pussy:

Yeowch, that is one hell of a slam the way his head whacked into the pavement too. He shouldn’t have messed with Eeyore in the first place – that guy was jacked up.

The idiot who rolls guitar guy over at the end also deserves a mention – surely everyone knows you need to put someone in the recovery position in that kind of situation and not move them at all. Come on dude.