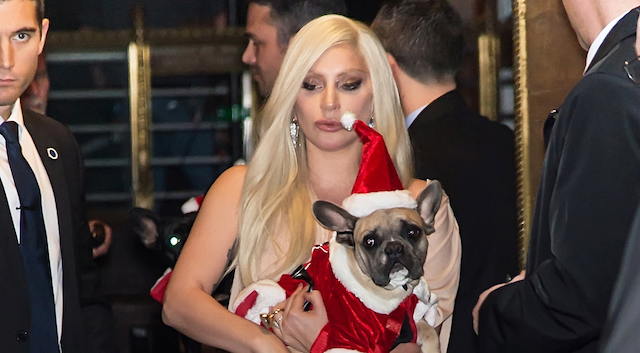 I didn’t think that celebrity dognapping was an actual thing that happened outside of sitcoms and maybe an episode of The Simpsons (?) but it turns out that it’s very much real if this story about Lady Gaga’s dog walker is anything to go by.

This is because Ryan Fischer was shot four times in the chest on Wednesday night when he was walking Gaga’s three French bulldogs Koji, Miss Asia and Gustavo at around 10pm in West Hollywood on Wednesday night. That seems a little excessive from the gunmen just to steal a couple of dogs, but that’s what happened and Gustavo and Koji were taken.

Miss Asia ran off into the night and was located by the police later and Ryan himself was alert and speaking to first responders when they arrived at the scene, so thankfully he wasn’t too badly injured despite being shot multiple times in the stomach. Lady Gaga herself is away shooting a movie in Italy at the moment, but has already offered a $500,000 no questions asked for the safe return of her babies.

Interestingly, apparently there is a huge demand for French bulldogs and they’re also very expensive with ones of pedigrees similar to Gaga’s dogs going for as much as $10,000 a pop. With that in mind, it’s quite possible that the dognappers may not even have known they belonged to Lady Gaga and could be in a whole different situation to the get rich scheme that they had envisaged. Sounds like a great idea for a movie to be honest.

For more of the same, check out this banned Lady Gaga video with R. Kelly and Terry Richardson. Not sure what she was thinking back then.