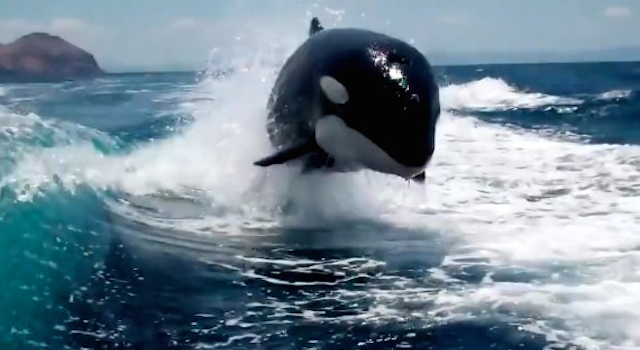 This really is some amazing and incredible once in a lifetime footage.

Some couple called Rich and Laura Howard decided to spend their 20th wedding anniversary off the coast of Mexico in La Paz at the Costa Baja resort/spa. They were scheduled to go on a dive with the friendly resident sea lion colony but this got interrupted when a pod (that’s the correct collective term, I looked it up) of killer whales decided to join in and swim behind their boat like dolphins.

It sure is a sight, and pretty much like nothing I’ve ever seen before. Their comments are pretty generic and inane, but I guess if you did see something like that you would be pretty amazed. Although personally I’d probably be shit scared that they would capsize the speed boat with one of their jumps considering how huge and crazy they are.