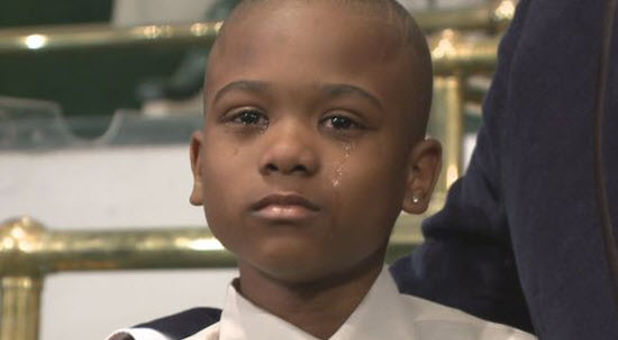 Boy gets tossed from his kidnappers car after singing a church song for three hours straight.

We’ve heard stories like this before. Some creeper snatches up a lad or lass and they end up throwing them back soon after. In this instance a 10 year old boy (Willie Myrick) from Atlanta, Georgia escaped a kidnapper by singing his favourite church song on repeat.

The boy was walking his dog and was cleverly tricked by a few dollars near a tree. The boy was grabbed by the attacker and forced into his car. This is where it gets interesting.

The boy says the kidnapper was cursing at him and threatening him and the boy began singing a gospel song “Every Praise” by Hezekiah Walker for the next three hours.

I don’t know about you folks but listening to some church type tune for a few minutes, let alone a few hours would be enough to drive anyone mad. This reminds me of some of the torture techniques the USA military used in Iraq involving sound. They played that kids’ Barney tune “I love you” super loud for 10-12 hours straight. Death or something close to that would be a relief no doubt.

Eventually little Willie was let go and went house to house miles away from home seeking help. He was even turned down by a few knob heads, but some older man with common decency helped the boy and called the police.

When the story got around Hezekiah Walker of the song decided to come to Atlanta and sing for the boy in person. He even boldly takes credit for his song saving the boy’s life. “I am overwhelmed and touched. To think that this child was in a situation that may kill him and the first thing he thinks is to sing ‘Every Praise’. God spoke through me to save that boy’s life.”

But this whole situation makes me think about what they are implying here. They are saying that there was divine intervention on some level. Personally I’m down with spirituality, but to make outrageous claims saying that your song directly saved the boy’s life and was more or less written by God? Rude and improper I think.

There is a $10,000 reward for information leading to an arrest of this kidnapping wanker. But religious ideals aside, I think we all can agree that this guy needs to go away for quite a while.

Here’s the song – you can definitely see why the kidnapper could take no more:

â˜› More: Was This The Worst Jesus Of All Time?