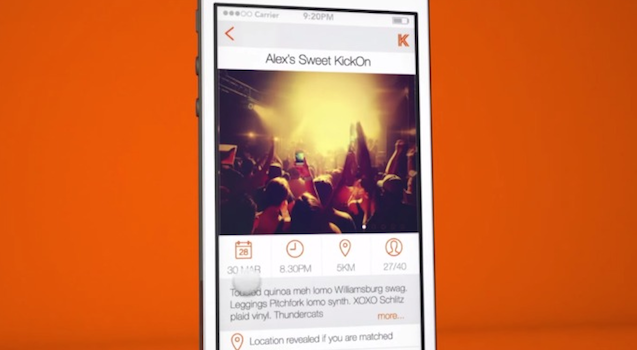 For when you really need somewhere to go at 5 am in the morning.

Following the success of Tinder – and all the lolz we’ve had from all the creepy guys on there – the next step has occurred with new app KickOn which allows you find the perfect after party when you’re beaned off your face at 5am in Fabric.

It’s being marketed as an ‘event discovery app’ which allows you to search for stuff going on in your area and then join the party. Once you’ve joined the host of the party – who is presumably still coherent by some miracle and able to make informed decisions – can see what you look like and vet your profile and then send you a QR code so you can get access to it. Perfect right? I can’t see one little thing that could go wrong in that equation, can you?

The reverse also works if your party is looking a bit shit you can add it to the listings and stare at the screen as the invite list fills up with people you’ve never met. It’s sure to make house parties way more interesting than they used to be at least with that spectre of accountability for your actions pretty much removed completely. Perfect, like I said.

The developers have also added a neat little feature where they rank everyone on the site in terms of how sick their parties are in an effort to discover who the MVP – Most Valuable Partier – in each city, university and state is. If ever you needed an incentive to party then surely that’s it, right?

Unfortunately there is some bad news – it’s only available in the United States and Australia right now, but the developers are looking for university ambassadors over here to bring it to campuses. Hopefully it won’t be long until you’re trashing random people’s houses guilt free.

I’m thinking this might be a joke but enough people are reporting on it that it might be real, not really sure right now.