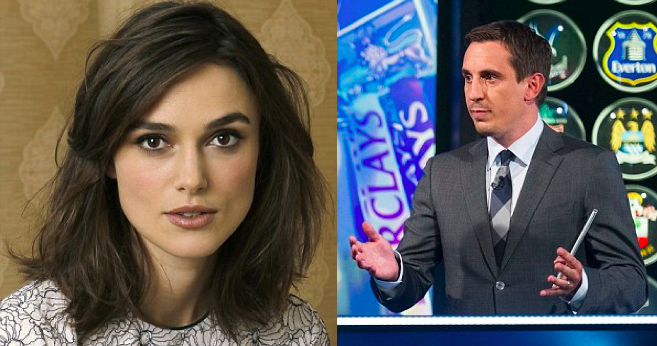 Does this make Keira Knightley completely cool or a bit of a weirdo?

Not sure how to feel about this one – on the one hand it’s really cool that a babe like Keira Knightley loves football and has a good enough grasp of the game that she appreciates Gary Neville’s analysis (which to be fair is completely sick) but on the other hand the thought of a babe like Keira Knightley hooking up with someone who looks like Gary Neville makes me despair for my life. Still, fair play to the guy.

Keira recently revealed in an interview with The Sunday Telegraph that she only recently even bought a TV, and that the only reason she got one was to keep up with the football. LAD. She also says that her favourite thing about football is listening to Gary Neville talk because she’s totally in love with him. Hmm.

Anyway, here’s the full transcript. Make up your own mind as to whether it’s cool or not.

‘Football is basically the reason I got a television. I didn’t have one before, because I didn’t know where I was going to be, so there was no point.

But now I have one because it was getting ridiculous watching football on the laptop.

They’ve added loads of other [pundits] alongside him now, but I preferred it when it was pure Gary Neville.’