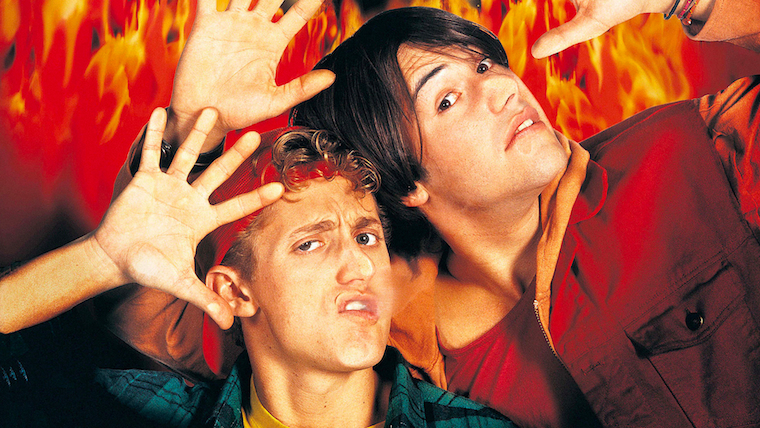 After 18 months of ‘taking it in their own hands,’ the writers for Bill and Ted 3 have finally developed a plot. Unfortunately Keanu Reeves has to relay it to us though.

Ages and ages and ages ago on Sick Chirpse we revealed that Bill and Ted 3 was actually going to get made. Well, maybe,  Keanu Reeves was quoted as saying that he had had a couple of meetings with Alex Winters and the writers of the the original two movies and that the writers were intending to take ‘the writing of the movie into their own hands’ and prepare a draft spec. That was 18  months ago, but apparently now the writers have actually taken it into their own hands and come up with some kind of screenplay. Or at least a basic plot. Unfortunately it sounds like they spend the past 18 months watching that shit Tenacious D video over and over again.

Here’s what Keanu Reeves had to say about the movie when he was talking to GQ : ‘I don’t know. It’s one thing to think about it, but to perform it… One of the plot points is that these two people have been crushed by the responsibility of having to write the greatest song ever written and to change the world. And they haven’t done it. So everybody is kind of like: “Where is the song?” The guys have just drifted off into esoterica and lost their rock. And we go on this expedition, go into the future to find out if we wrote the song, and one future “us” refuses to tell us, and another future “us” blames us for their lives because we didn’t write the song, so they’re living this terrible life. In one version we’re in jail; in another we’re at some kind of highway motel and they hate us.’

It doesn’t really sound that good does it? Or maybe Keanu Reeves was just confused by the plot and couldn’t explain it properly. Anyway, apparently some dude who directed Galaxy Quest (anyone remember that gem? I think Sigourney Weaver and Tim Allen were in it and it came out in the mid 90’s. I guess this guy has has a stellar career since then so is clearly the right guy to direct it) is attached but they don’t have any funding yet. Keep holding your breath I guess.