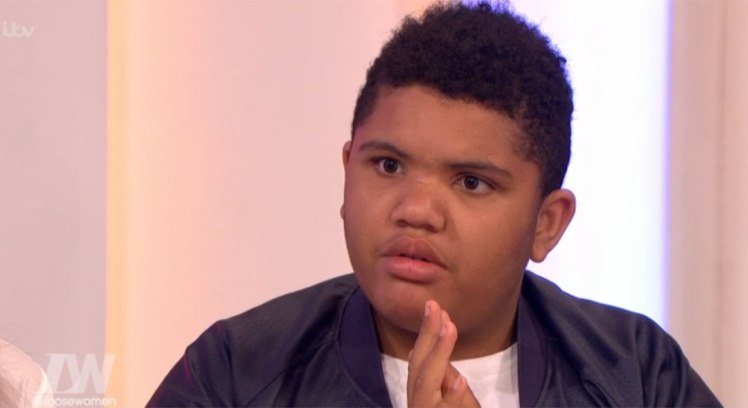 Jordan/Katie Price has been very vocal about how her son Harvey has been relentlessly hounded by online trolls who take the piss out of him. In case you didn’t know, Harvey has a host of ailments – including autism, blindness and Prader Willi Syndrome, which means he will never stop eating as he never feels full up.

To give an update about how Harvey was dealing with these bullies, Harvey and Katie Price today bravely appeared on ‘Loose Women’ and Jordan insisted that the segment wasn’t pre-recorded so that viewers could see how vulnerable he was. This may have backfired for the producers of the show though, as when asked how he dealt with online trolls Harvey said that his favoured method was to drop the C-bomb on them:

Although the presenters were quick to hush this up and apologise, most people watching at home have voiced their approval for his actions and stated that it’s the perfect way to deal with bullies. To be fair, I have to agree – if someone is ripping you then just rip back into them twice as hard and it’ll soon put an end to it. It’s an even better response when it’s coming from a kid who’s got all the problems that Harvey suffers from. Fair play to the kid.

Katie Price has stated that following on from this, she wants to travel around schools with Harvey and educate children, parents and teachers about the dangers of internet trolling and cyber bullying, as she reasons that most kids would never have the guts to say the kind of things they do online to his face. Fair play to her as well – I doubt they would either and the sooner they stop doing shit like that online and realise how damaging and harmful it can be, the better.

In the meantime, if anyone is cyber bullying you, just follow in Harvey’s footsteps and reply with a “hello you cunt”. Easy.

Maybe a mother and daughter who spent a combined £56K on plastic surgery to look like Katie Price probably do deserve to be cyber bullied though.