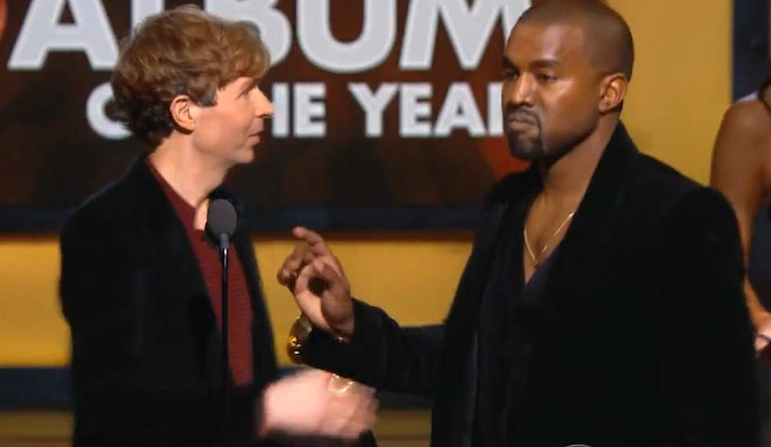 Turns out Kanye is still a dick.

You’ve probably seen the video of Kanye West getting up on stage during Beck’s acceptance speech last night and hastily backtracking before actually saying anything. Most people thought that he was just making fun of his infamous rant at the 2009 MTV Video Music Awards, where he rushed the stage and interrupted Taylor Swift’s speech after she had just won the best video of the year after beating out Beyonce.

It turns out though that we were wrong, and Kanye does have a problem with Beck beating out his old buddy Beyonce for album of the year – he just thought better of getting up on stage and ranting this time as he didn’t want to embarrass his daughter or derail his clothing line. Duh, of course that was why – it’s kind of ridiculous to think that it could have been anything else really when you’re dealing with Kanye West isn’t it?

He thinks that Beck should have given his award to Beyonce so that he can ‘respect artistry’. Kanye then went onto bash the whole idea of the Grammy Awards, saying there were ‘disrespectful to inspiration’ and that he was here ‘to defend creativity’. Not sure how going on a rant about it after the event is that much more different than going on a rant about it during the event, but hey I’m not Kanye West so what the hell do I know?

The best thing about all this though is how embarrassed Kim Kardashian looks all the way through it – it actually almost gave me a bit of a respect for her. Almost – but then I remember stuff like this and it’s back to square one again.