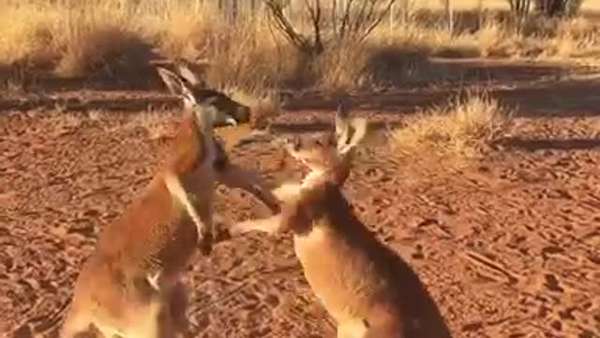 Kangaroos going at it.

Kangaroos are well known in the animal kingdom as being really scrappy and aggy and always fighting people – even humans sometimes – so it’s kind of surprising that we don’t have many awesome videos of them fighting.

We have got this one though. I’m not sure why these two kangaroos are fighting or even where it is – aside from Australia obviously – but it’s a brutal 30 second fight that’s probably better than some actual MMA fights I’ve seen recently.

I love all the clinches and kicks they do and how they smack each other in the face with their little arms over and over again. I don’t really get what happens at the end though where they just kinda stop and look at each other. I guess they’d had enough.

Weird – I kinda wish there was a winner but I guess that’s life. Maybe we’ll see a rematch at a big PPV soon.

For more of the same, check out this one posing and flexing like a badass. Intimidating.