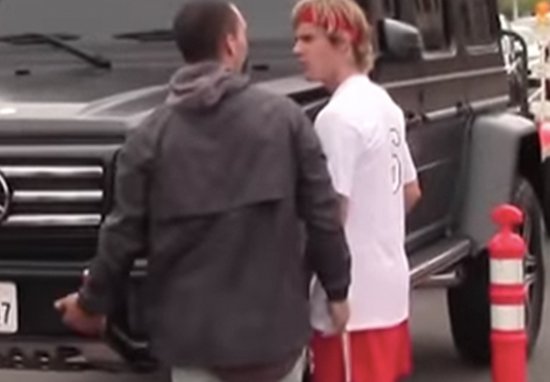 Justin Bieber has had more than his fair share of spats with the press and fans over the years, but for the most part he seems to have been laying pretty low for the last year or so and keeping himself out of trouble.

That obviously wasn’t going to last forever though and Bieber is hitting the headlines once again after he went completely mental at a fan trying to get a selfie with him. The Biebs was in LA watching a football game when he was heading back to his car following its conclusion.

The fan sneaks up on Bieber and puts his arm around him as he tries to snap the selfie, but a clearly annoyed Bieber smashes the phone out of his hand, shouts at him a bit and then throws a towel at him, before storming off into his car. Check out the footage of it below:

Damn, that’s not that cool but I suppose you can’t really blame Bieber when people are invading his personal space and asking him for selfies probably 24/7. Kinda feel sorry for the guy but then you think about how much money he has and you don’t feel quite as bad for him. Mo’ money mo’ problems I guess.

For more Justin Bieber, remember when he attacked a paparazzi cameraman? Legend.