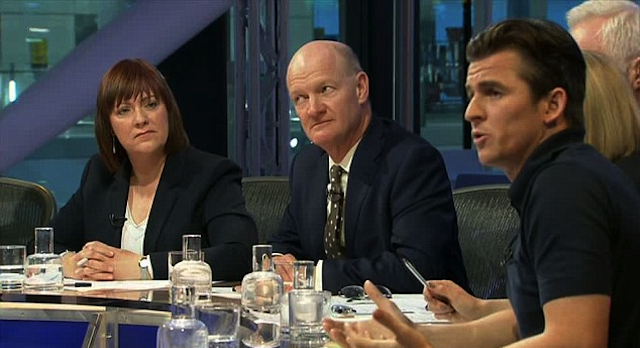 As you can probably imagine, Joey Barton had some choice comments.

Following the UKIP’s victory in the European Election last week, the BBC decided to react to this by getting the two smartest English people in history to have a debate with them on Question Time. Yeah, that’s right they got in Piers Morgan and Joey Barton.

For some reason I didn’t find out about this until after it had happened and chose to spend my Thursday night going to a live comedy show. I had to question my judgment here as invariably what I would have seen last night on TV would have been way funnier than whoever I went to see last night, even if it was Joey Barton and unfortunately there’s not actually a video of the whole thing.

However, undeniably the best part of the show had to be where Joey Barton compared the four political parties in this country (unfortunately there are now four and UKIP is one of them) to four ugly girls and saying that UKIP isn’t the worst of them, but that doesn’t mean anything.

To be fair that’s not a bad analogy and it was made even better though by the fact that he said this to a really minging UKIP member called Louise Bours. Classic Joey Barton, take a bow.

Unfortunately he later apologised for the comment (pussy) and seems to get taken down by the party member in the clip below. The comment apparently haunted him throughout the rest of the programme with chair David Dimbleby making frequent jokes about it, although Barton is said to have performed fairly admirably for the rest of the show which is pretty impressive considering he’s an idiot footballer. He didn’t go at Piers Morgan though, which again is disappointing.

A lot of people are giving Barton a lot of shit today about the comment and it being sexist – which it undoubtedly is – but I think they’re losing sight of the real effect of the remark. You’ve got to say that the fact that Barton said something stupid in the debate can only be great for the nation as a whole because it’s going to make people who might not normally give a fuck about this kind of stuff (like the 66% of the population that didn’t vote) more aware of the issues and even if it was slightly sexist (I don’t think it’s really THAT bad, the guy is a footballer you know), the good would outweigh the bad.

Fair play to the BBC for getting him on board in an effort to try and raise awareness of what a fuck up this whole UKIP thing is and that it doesn’t get even worse, and fair play to Joey Barton for stepping up and giving it a go. Hero.

You can read a full transcript of the debate courtesy of The Daily Mirror (huh?!) here and see a longer video of the debate below: