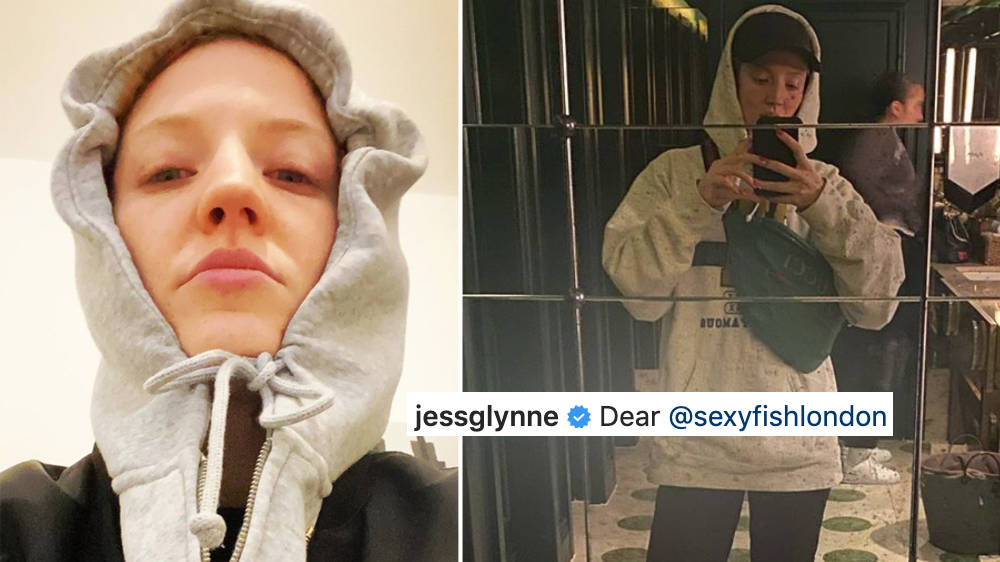 Her and her friend were denied a table at Sexy Fish.

I’m not exactly a big fan of Jess Glynne – not sure if I could even name one of her songs to be honest – but her recent Instagram post about London restaurant ‘Sexy Fish’ denying her entrance for wearing a hoodie is too good not to share as it seems to have got a load of people riled up due to her describing it as ‘discrimination’.

The post originally appeared on Glynne’s Instagram where she described what happened, but it soon appeared on Twitter which we all know is a way more toxic environment and as such, everyone started to call her out, either for not adhering to the dress code or falsely saying that it was discrimination when there are way worse forms of discrimination going on out there. Check out some of the best ways she gets dragged below:

Dear @sexyfishlondon I turned up to your restaurant looking like this and you looked me and my friend up and down and said no you can’t come in and your restaurant was EMPTY. I then went to @amazonicolondon who greeted me and my friend with pure joy and we had a banging meal with wicked service. @sexyfishlondon please check yourself if this is how you treat people cause it’s rude, off putting, embarrassing and most definitely not inviting. We were made to wait and 2 members of staff came to look at us and make a decision based on our appearance. I think the attitude of your staff needs to change as that was pure discrimination. Thanks and bye 💋

someone needs to tell jess glynne that… being turned away from a restaurant cos you’re wearing a hoody is not discrimination. pic.twitter.com/8GjPQlhpoK

Well look at that, right there on the website. If only there was a way for her to check. 🤔

This is the modern social media way of saying “don’t you know who I am?”

I’m actually quite embarrassed for her

Their website has a dress code clearly written on it. No sportswear. It would be worse if they bent the rules just because you’re a celebrity.

Wouldn’t even go to McDonald’s dressed like that, come on now Jess

I don’t think this went the way she thought it would go. When ‘internet do your thing’ backfires.

Jess Glynne may not be personally discriminated against, but the dress code existing in the first place is discriminatory. It discriminates against those who traditionally wear hoodies and sportswear, typically lower classes and people of colour.

Obviously at a base level the Jess Glynn thing is funny. But also the tone deafness jumps out – there is a legitimate point to be made of how nightlife venues in London use them to justify racially discriminating entry policies…. Hers extremely ain’t it.

I think those last two takes pretty much sum it up more succinctly then I ever could, I’m gonna try though. I’ve always found it a bit whack that some restaurants and clubs require you to dress up in order to get in because it is undoubtedly judgmental and indicates they only want people of a certain social/financial status in there, so I can understand what Jess Glynne is saying there – it’s just obviously the way that she said it was completely tone deaf so it’s no surprise that she’s getting rinsed about it.

There’s also the fact that although me and Jess Glynne are clearly no fans of them, dress codes are still a big feature of this country so to try and rock up at some swish Mayfair bar/restaurant dressed like that is just asking for trouble. You gotta respect the system and clearly writing a post like that to shame them isn’t going to do much to change it. Thanks for giving us a good laugh though?

For more of the same, check out our take on