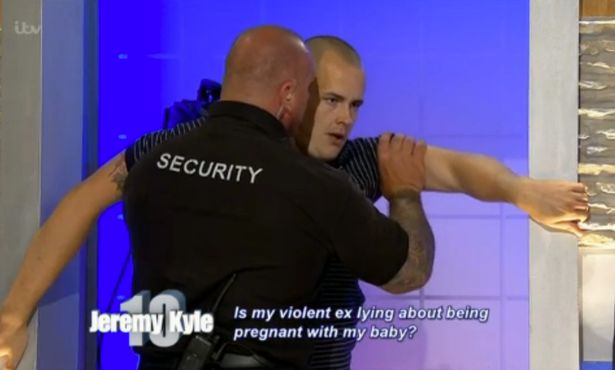 Jeremy Kyle is lucky he didn’t get murdered on his own TV show.

This guy named Scott was in the audience of the Jeremy Kyle show offering moral support to his girlfriend of 3 weeks as she faced accusations from her ex that she was lying about her pregnancy. Not the kind of thing anyone with a brain would want to settle on daytime TV, but for some people being featured on The Jeremy Kyle show is one for the CV.

Scott wasn’t happy with the way things were going (someone suggested his girlfriend was fat and not pregnant), so tried to charge the stage but  ended up getting held back by Big Steve. Naturally Jeremy Kyle started talking shit to the guy, who then challenged Jeremy to a fight instead:

Good thing for Kyle his security team is pretty solid, despite their lapse in concentration the other week.

Turn out his girlfriend, Claire, was telling the truth anyway — her pregnancy test came back positive. It’s her ex’s baby though, not Scott’s, so maybe there’s another episode to be made of this drama yet.

If you were hoping someone might’ve finally got their hands on Jeremy, read about the time he got pepper-sprayed in Magaluf HERE.