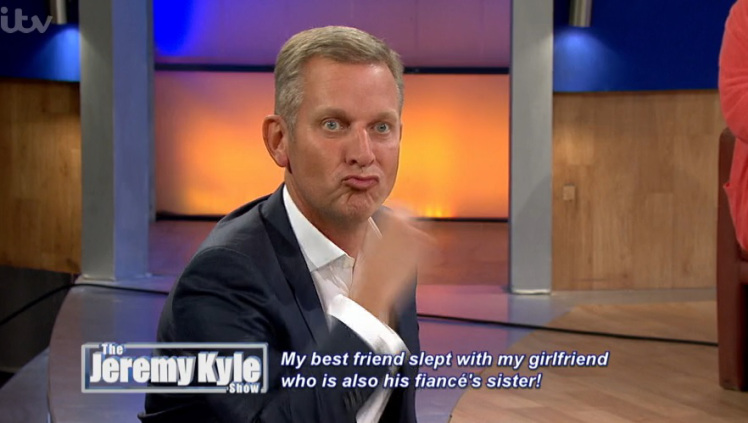 As I’m sure you’re all aware, Brussels was the latest victim of a co-ordinated terror strike this morning on its airport and metro. Obviously our thoughts and prayers are with everyone in Brussels and everyone affected by these atrocities because terrorism absolutely sucks and killing a bunch of innocent people is never the answer to anything.

Due to these attacks, many TV channels changed their scheduled programming so that they could keep the world informed about what was going on. ITV was one of these channels, who decided to bump The Jeremy Kyle show from its usual 9:25 a.m. slot and continue coverage of the attacks via This Morning with Piers Morgan and Susannah Reid.

Unfortunately though, that meant that a bunch of Jeremy Kyle fans were VERY unhappy and they took to Twitter to air their grievances:

#gmb desperate attempt @ being taken seriously = cancelling #jeremykyle why is this bombing more important than the others? #itv #gmb

Jesus, people like this actually exist? Don’t they understand that there’s more important things than watching the fucking Jeremy Kyle show, like when there’s been a huge terrorrist attack on a country nearby?

It honestly even blows my mind that there are so many people that actively tune in to watch The Jeremy Kyle Show every day – I always thought it was something you whacked on when you were really bored and there was literally nothing else on TV to watch. I guess that isn’t actually the case though.

Seriously, these people need to sort their lives out if they’re so upset that their favourite TV show got cancelled because of this. Some things are more important.

They also need to sort their lives out if their favourite TV show is The Jeremy Kyle show too. I mean Jeremy Kyle himself is a raging hypocrite for a start – he got divorced himself after a three year affair and reports of drunken abuse.