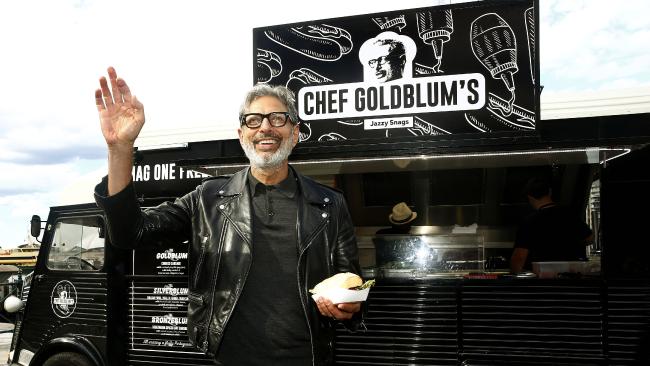 Jeff Goldblum is undoubtedly a man of many talents, but I don’t think I ever pictured running a food truck as one of them.

Goldblum was recently on the Gold Coast shooting the new Thor movie, but yesterday he showed up in Sydney with a fully customised food truck handing out a whole bunch of free sausages and sandwiches out to people. Whilst this sounds completely ridiculous, there are more than enough photographs of him on Instagram to prove that this actually happened, although nobody actually knows why.

When asked by fans just what the hell he was up to, here’s what Goldblum said:

I’ve gotta do some work.

I was doing the Thor movie on the Gold Coast some time ago but now I’m doing a project that I have to be secretive about but there is some thematic tie-in to this.

Damn. Wonder how long we’re gonna have to wait? Maybe he’s making a reality TV show about starting his own street food company – that would be cool I guess. Gotta wait and see though.

I just can’t get my mind off the idea that at least one person was just walking down the street yesterday and saw this food truck called Goldblum’s and thought, ‘what the heck is that?” and then when they went a little bit closer to check it out, they found out that it was actually Jeff Goldblum handing out free sausages. That’s gotta be a real headfuck right there.

Hope his truck makes it over to London and I can experience that feeling myself, that’s all I can say. Did you hear he’s officially signed up for Jurassic World 2? What a week in the life for Mr Goldblum.