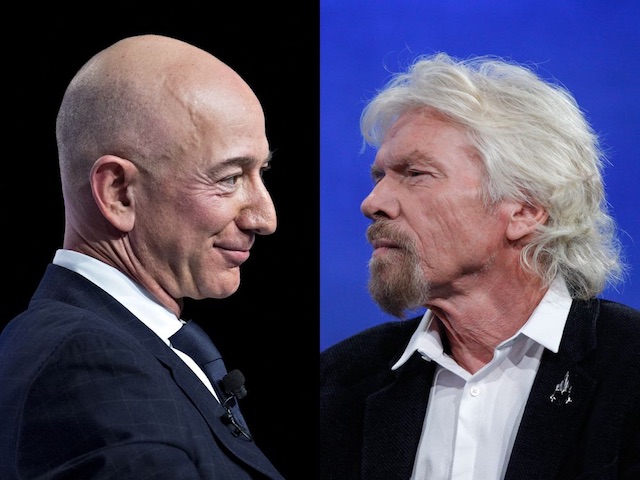 What a bummer for the guy.

I haven’t really been paying attention to the ‘billionaire space race’ as it’s being called and missed it completely that Richard Branson won it on Sunday because I was so wrapped up in the Euro 2020 final, but here’s quite a funny recap of what went down.

I think you’ll probably know even if you only had a passing casual interest in all of this that Bezos was going up agains Richard Branson to see who could make it into orbit first – Elon Musk is involved as well but he’s looking at letting people stay in space for an extended period of time – and Branson recently bumped up his launch to July 10th after Bezos announced that he was heading to space on the 20th. Branson launched from SpacePort America in New Mexico at 8:30am local time on Sunday morning, before releasing the Virgin Galactic rocket at an altitude of 53 miles.

NASA and the United States consider the 50 mile altitude to be the boundary between earth and space, so at this point Branson and his crew officially became the first private citizen spaceflight. The crew were all able to unstrap their seatbelts and appear weightless in space without any gravity and Branson also took the opportunity to send a really corny speech. You can watch that and a vlog of the whole day below:

Congratulations to Branson I guess? Looks like it was pretty fun if nothing else. Obviously Jeff Bezos was completely butthurt that he wasn’t the first billionaire in space – that’s literally been his whole dream since he was a little kid – and posted the following ‘congratulatory message’ to Branson on his Instagram account.

Lol. You can almost hear him saying all that through clenched teeth can’t you? Really funny that he posted a picture of his own plane in the message too and nothing to do with Branson and his mission. Hope something goes wrong and on his launch and it ends up being even more pathetic. Must be a real wounder having literally all the money in the world but not being able to achieve the one thing that you really really wanted. Unlucky pal.

For more of the same, check out when the Saudi crown prince hacked Jeff Bezos’ phone and leaked his dick pics. That was a funny one.