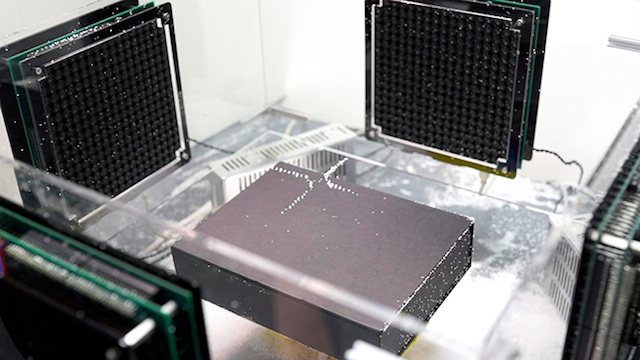 We’re one step closer to riding the hoverboard like Marty McFly in Back To The Future 2.

OK, let’s hope that this isn’t fake because if it isn’t it means we’re one step closer to hoverboards – we’ve still got a year to go before Marty McFly landed in 2015 remember. I don’t really understand the science behind it – which is explained in the video – but it looks legit to me and everyone talking about it is legit describing the people in the video as scientists so we can but hope that this is real because it looks incredible and could legitimately change our lives forever if it turns out to work.

The three Japanese scientists/engineers are from the University of Tokyo and the Nagoya Institute of Technology and the device they’ve recently unveiled uses sounds waves to move objects through three dimensional space. It uses four sets of speakers which converge their sound waves on one point that can be moved up, down, left and right using a set of controls, essentially allowing objects to be levitated and moved around. What’s better is that the sound is ultrasound so the machine isn’t even loud – it’s completely silent.