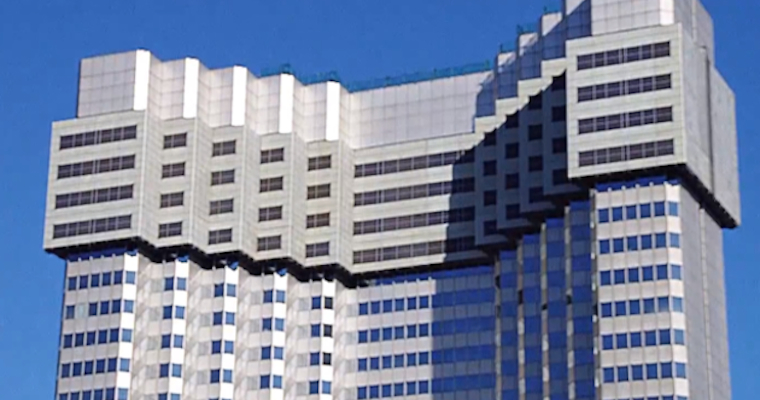 This is a completely revolutionary way to demolish a building and it’s also kind of insane that it’s actually real, even if it is 2013 or whatever.

I bet when you clicked on this you expected to see a bunch of explosions or other cool shit and a bunch of buildings falling down or exploding or imploding or whatever didn’t you? Well yeah, sorry to disappoint but there isn’t anything like that in this post and the Japanese have actually invented a new system of demolition that is ACTUALLY incredible and really clean and useful as well. As such it’s kinda boring but if you want to watch a bunch of explosions and crap like that there are some links in this post so you might as well read on and at least give it a shot.

The Taisei Ecological Reproduction System or TECOREP for short (which is also way cooler because it almost sounds like TACOREP) is some organisation in Japan that is pioneering this new way of deconstructing buildings which although is no way as cool as demolishing them is still pretty awesome just because it’s so futuristic and well, Japanese I guess. The idea is that TECOREP take cranes inside a building and then deconstruct each floor from the inside. Temporary columns are used to hold up the roof of the building whilst the workers scurry around the building dismantling the floor and then the roof is slowly lowered to the next floor using jacks. Pretty crazy huh?? The effect is the reverse of a building being built and actually just looks like a building slowly being deconstructed floor by floor. It’s really weird.

The President of TECOREP described the process like this: ‘It’s kind of like having a disassembly factory on top of the building and putting a big hat there, and then the building shrinks.’ Looking at the video below and having read the description of the process I don’t think that it sounds anything like that though. I mean where the hell is this big hat?? I don’t see a big hat in the video or read anything about a big hat in the description? What the hell is the big hat all about? What the hell is he talking about? It’s not like there are even any hats that are big enough to cover a building anyhow. Japanese people are so cray.

The greatest part of it all though is that this form of demolition is way more environmentally friendly than just straight up demolition as it cuts noise pollution from 23 to 17 decibels and reduces additional dust by 90%. Wow, huh? So it looks like all those cool explosion videos of buildings being demolished might be a thing of the past. Which is kind of a bummer, but I mean we’ll always have the videos at least right? It’s not like they’re going to be replaced by boringass videos like this one of a building being slowly lowered. I mean I’m all for the environment but it’s nowhere near as cool as something getting blown up, am I right?

Check out a video of a building being demolished using the TECOREP system below, or click on some of the links around this article to see some real explosions:

â˜› Watch This Next: Here’s A Collection Of Huge Video Explosions