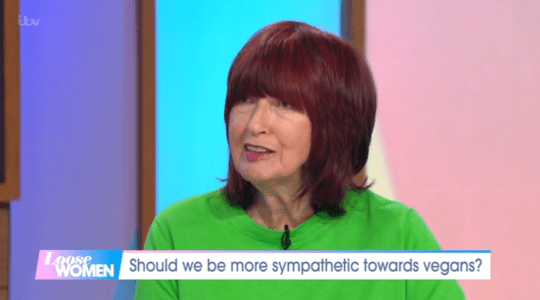 Seems like I write something pretty much every week on here about veganism as the movement continues to grow and grow and a lot of the time that’s about how people are completely and utterly butthurt about just how things are developing.

Today it was the turn of Loose Women’s Janet Street Porter, who likened the growth in veganism to an unrelenting military campaign:

When is it going to end?

Vegans are still a small percentage of the British population and yet they attract the most publicity minded people and through an organisation like the Vegan Society every day we get press releases and it’s like a militant campaign with unrelenting demands.

Now their own shelf in the office? Can you imagine that? What do they want next, own areas in restaurants? You can see where it’s going, can’t you?

Where does moderation come into this… these days people are eating less meat, why can’t people be happy with that? Why have we got to make extra space in our cupboards?

Lol. I never get why old ass boomers get so angry about stuff like this – is it really that much of a problem to put your stuff on a different shelf? – but at the same time I can appreciate how it’s probably fairly annoying that vegans moan about having meat or dairy products near their food in the fridge or whatever. It’s not gonna affect anything, so just quit complaining the both of you hey!

The thing is that the vast majority of vegans I know wouldn’t even care about something like a separate area to prepare food or having to share a cupboard with animal products. Most of them just want to get on with it and aren’t as whiny as the 2% who are completely militant and bring everyone down. Just stop moaning and live a little.

For more of the same, check out this report that says vegans take twice as many sick days as everyone else. Losers.