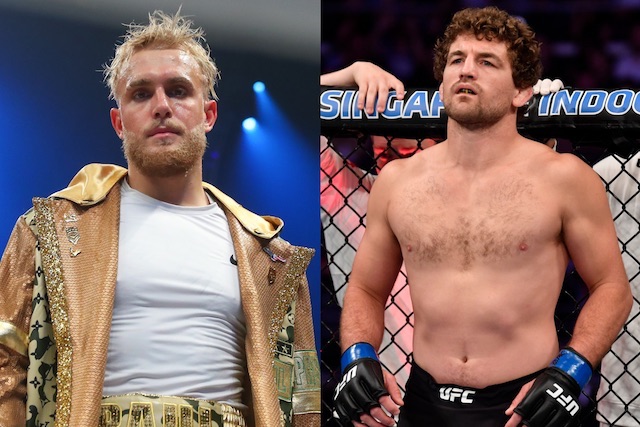 We all know that Jake Paul has been looking for a fight with Conor McGregor over the last couple of months, but it sounds as if he’s decided to settle for another washed up MMA personality in the form of Ben Askren instead.

Askren is probably best know for being the victim of the fastest UFC knockout in history – courtesy of a flying knee from Jorge Masdival – but other than that he has a really good MMA record, holding championship belts in both Bellator and ONE as well as competing at the Olympics for the United States. He accepted Jake Paul’s challenge back in December, but now it looks like it’s a done deal, as per MMA’s premier journalist Ariel Helwani:

Jake Paul will fight Ben Askren in an eight-round pro boxing match on April 17, per Triller founder Ryan Kavanaugh. The fight will serve as the main event of the next Triller Fight Club card. Location TBD.

Here’s what Paul had to say about the fight:

[Askren] has less losses on his record than Conor McGregor does yet I’m still going to knock him out faster than Jorge Masvidal did.

Some MMA guys think that because they throw punches they know how to box.

I shocked the world when I knocked out an NBA superstar athlete but still some people complained that he’s not a real fighter.

So now I’m giving the people what they want by taking on a real fighter.

After I add Ben to my knockout meme collection, what can anybody say?

Well quite. It seems obvious that Askren will beat Paul given the fact he’s a professional fighter, but I guess the fact that he’s more of a wrestler than a boxer is going to count against him in the buildup to this stupid bout. Will definitely be tuning in to all the dumb crap that is going to go on between these two for the next couple of months.

For more of the same, check out when Jake Paul was spotted looting a mall last summer. That was weird.