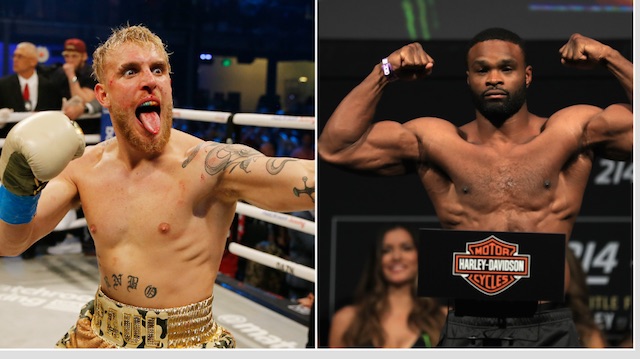 It’s fair to say that pretty much everyone in the world is at least taking a passing interest in Jake Paul’s next fight as they want to see the annoying little prick get KOed after he managed to stop Ben Askren in the first round, so most people will probably be hyped to see that his next opponent is former UFC welterweight champion Tyrone Woodley.

The news comes courtesy of The Athletic’s Mike Coppinger, who says that the fight is pretty much signed, sealed and delivered with the date being announced at a later time. Woodley was in Askren’s corner during the bout with Paul and is a teammate of the guy, so that adds a little more drama to the fight as well.

Apparently they’re setting up a press conference in Miami for Friday to make the official announcement which will undoubtedly be full of bad trash talk and really dumb hijinks – it’s probably not ever going to top Jake Paul stealing Floyd Mayweather’s hat a month or so ago though. Anyway, here’s a somewhat embarrassing video of Tyrone Woodley from a couple of weeks ago saying that he’s going to smash Jake Paul’s head in for being a culture vulture:

Jake Paul is – well I guess we kind of recognize he came from Disney, we expect him to be this little f***ing Macho Macho Man that he’s playing.

But he keeps calling out everybody but me. I’m the one with the real smoke with you.

They just culture vultures. Like, he’ll ‘vult’ the juice from his own damn flesh and blood.

Come and get this smoke for real.

If Jake dropped his ball sack out his stomach and sign the deal, then I think Floyd would be happy that I’d be the one to knock his f***ing head off.

Tough words, kinda. Can feel Jake Paul probably trash talking the shit out of him to be honest.

One top of that, when you think about the fact that Tyron Woodley is absolutely massive and a former UFC champion you would think that this is a fairly one sided match up, but given that Woodley is coming off the back of four straight losses that led to him being cut by the UFC, then I’m not so sure. I’m no expert on his career either but it once again seems like he’s way more of a wrestler than a striker from what I’ve seen and after seeing what happened with Ben Askren who was in a similar boat, then it seems as if Jake Paul might actually end up being the favourite. Surely he can’t knock Woodley out as well?

For more of the same, check out when Jake Paul tried to justify when he was spotted looting a mall. Didn’t go down too well.