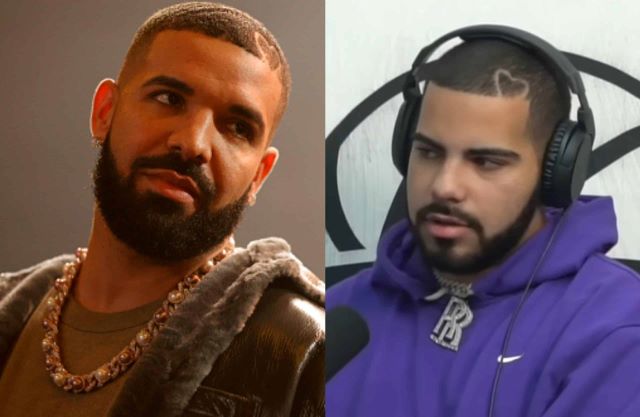 That has to sting.

Izzy Drake AKA Fake Drake is probably the most cringe person on the internet right now, doing a relentless job of milking his doppelganger status by performing at crappy clubs and telling anyone who’ll listen that he and Drake are buddies.

He even shared a video of himself FaceTiming Drake in which Drake couldn’t hang up on him fast enough:

Things got even worse for Fake Drake recently when he got kicked out of a strip club in Houston because the club owner just straight up did not like him:

This week, Fake Drake got something of a reality check when he appeared on the ‘We In Miami’ podcast. The host was kind enough to play Fake Drake a clip of DJ Akademiks revealing that the real Drake told him personally that he “doesn’t even like you & is annoyed by you”. Watch below:

I just love how he took that big uncomfortable sip of his drink before he responded to that bombshell of information. I mean this guy genuinely thought that Drake appreciated the fact that there’s a guy running around emulating him and living a Z-list life based on his image. He also seems convinced that he’s on the brink of superstardom and that there’s even a 0.01% chance the real Drake will consider stepping into a boxing ring with him, let alone be seen in the same room as him. Unbelievable!

In fairness, I guess when you look that much like a celebrity you need to go all-in on it while you can. Might’ve been better off applying for a job as his body double instead of all this though. Then again, he might wanna hit the gym first – Drake is looking seriously jacked these days.