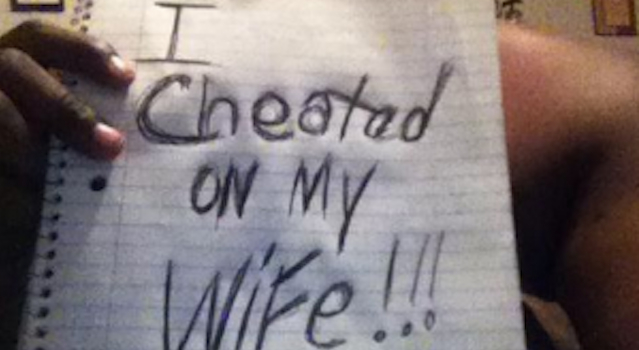 In the age of social media, this is the only way to deal with getting cheated on.

This is the definition of forgiveness in the modern age. When Sonya Gore caught her husband Ivan Lewis cheating on her (kinda weird they have different surnames if they’re married) she did what any normal woman would do in the age of social media – she forced him to put up a picture of himself with a note saying ‘I cheated on my wife!!! (and she was ugly!!!) on his profile.

Actually, they’ve been separated for two years and that’s why they have different surnames, but Ivan Lewis has recently asked Sandra to remarry him as it seems stuff was going well with them again. Until he cheated on her – again. The reason for their two year separation was – surprise surprise – the fact that he couldn’t keep his dick in his pants ever and cheated on her multiple times.

Now though it looks as though Ivan might have changed. Yeah right – if he can’t even not cheat on her and not get caught before they’re married again what the hell chance does he have afterwards? Despite this, the accompanying caption on the photograph of Ivan admitting his infidelity states that if it gets 10,000 likes then Sandra will take him back. Worryingly, it looks like it’s probably going to reach that number, if it hasn’t already by the time you read this.

Most people were rinsing him in the comments on the picture but then Sandra herself popped up with one of the most articulate comments ever, which pretty much implies even if he doesn’t get the 10,000 likes she’s gonna take him back. Aaaah – dumb love. You can check out how Ivan is doing on his Facebook profile. 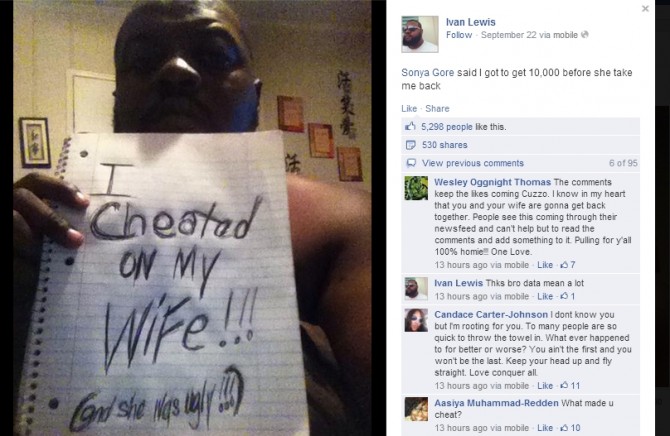