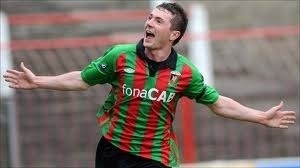 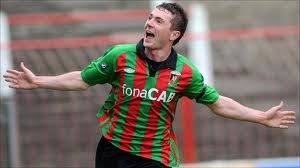 Irish league player Matty Burrow’s audacious backheeled volley in the final minute of the game for his team Glentoran (where?) against Portadown (and again, where?) has been included amongst big names like Samir Nasri and Arjen Robben in Fifa’s goal of the year shortlist. It is actually pretty special. Check it out here, and keep watching to check out another goal he scored only 4 days later against some other team nobody has ever heard of which is almost as good – it’s like a standing up bicycle kick from an acute angle on the edge of the six yard line. You’ll see:

Despite his new found fame (4 million hits on YouTube) Matty Burrows is still struggling to get into the Glentoran first team, even though he’s managed to score 15 goals from 11 starts and 10 substitute appearances: ‘Hopefully I will have at least given the manager a headache.’ Maybe some Premiership managers should take a punt on Burrows – there is after all a great tradition of players coming over from the Irish league and making an impact over here, such as Kevin Doyle and, um, Keith Fahey?

You can check out the other nominees for the Pukas Goal of the Year competition in the reel below to some awesome club music:

To be honest I was expecting to see some really awesome goals on this reel but most of them aren’t as amazing as I thought they would be, especially the ones from players who score all the time like Messi and Robben. And although it is kinda good it’s pretty obvious that the South Africa goal was only included because they hosted the World Cup and everyone thought they were really cool, like Arsenal score goals like that all the time even though they’re crap this season. You would think FIFA could have actually picked 10 awesome goals for this competition? Like I probably have a harder time picking goal of the month on match of the day then i do of picking my favourite out of these ones. Then again given the recent decision on the locations of the 2018/2022 World Cup’s it probably isn’t that surprising they’ve fucked it up again. I think the Chinese dude’s or the Swedish dude’s or Hamit Altintop’s or Burrow’s are probably the best, but I’m going to go with Burrow’s because I’ve never seen anything like it before, and neither has the world judging by the coverage it’s received. Messi will probably win though. You know, football politics or something.