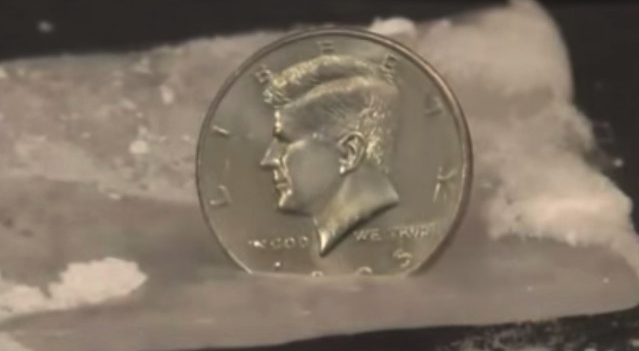 This is messed up.

Carbon dioxide is commonly known as a gas, but when it gets down to temperatures of -78.5 celsius it actually turns directly from a gas into a solid in a process that is known as deposition.

This substance is more commonly known as dry ice and something pretty crazy happens when you insert a regular coin into it – it produces a piercing wail and then starts vibrating, almost like it is shivering. It looks freaky, almost as weird as what happens when you drop a magnet in a copper tube.

Apparently this is because the warmth of the metal in the coin sublimates the dry ice causing a change in pressure. As the gas pushes past the coin, it makes the weird howling noise and then the coin forms a larger hole in the ice which produce larger air currents that subsequently move the coin around.