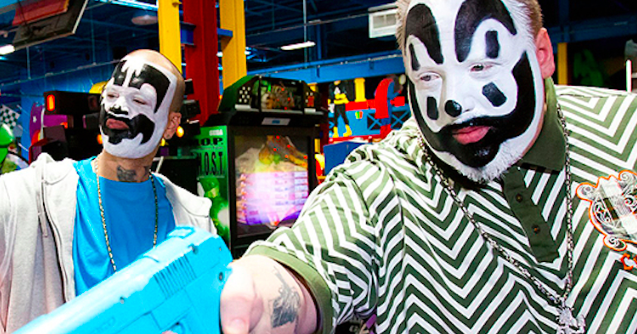 What is a juggalo? A violent street gang member officially.

Ages and ages and ages ago we reported that the Insane Clown Posse intended to sue the FBI over their classification of their fans – lovingly referred to as juggalos – as a violent street gang, which to be fair is a bit general and unfair. I mean it would make more sense to classify anyone who referred to themselves as a juggalo as a twat, hardly a violent street gang.

We didn’t really hear anything about it again for a couple of years until now, when it’s been announced that they’ve lost the lawsuit. Last week, Detroit federal Judge Robert Cleland said that the government is not responsible for the local police agencies that use the 2011 report to label juggalos as ‘criminal gang members.’

The FBI report had stated that the juggalos were a ‘loosely organized hybrid gang’ and it seems that some local law enforcement agencies interpreted this as the fact that juggalso were criminal gang members. ICP are obviously upset as they see this as a violation of the character of all juggalos (say that out loud and try not to laugh). This is probably a fair point – even if you think juggalos are really stupid – although it does seem like it’s all semantics really, and to be fair if you’re a police officer and you see a bunch of people running around in clown make up you’re probably going to think something is up, whether they’re classified as a gang or not.

Violent J is refusing to take it lying down though:

‘This is not the end. We’ll keep fighting to clear the Juggalo family name. While it is easy to fear what one does not understand, discrimination and bigotry against any group of people is just plain wrong and un-American’

We’ll probably bring you another update in about two years about how they’ve failed again.