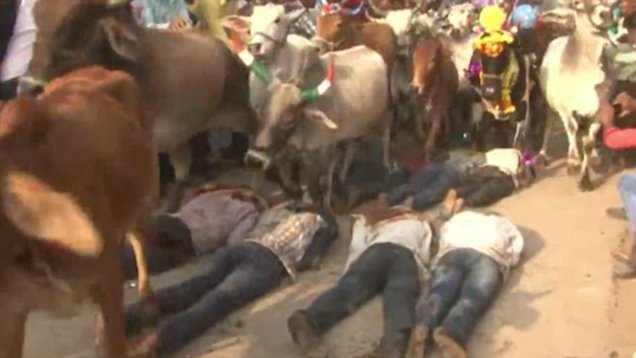 How do you think this went for them?

Superstition is a funny thing. Some people have lucky numbers, other people avoid cracks in the pavement, others walk around looking for piles of dog shit to step into, and some – specifically in India – believe it’s good luck to lay on the floor and get trampled by a stampede of massive cows.

In fact the century-old ritual observed by Hindu men takes place every fortnight in Ujjain in central India, and despite the obvious dangers and injuries picked up by past participants, hundreds of men travel far and wide to the city to get involved.

The idea is that as your injuries recover, your luck grows too. Riiight.

Watching that, it doesn’t actually seem like a good idea, does it? I mean I know that cows are sacred in India, but I’m not sure how that translates into it being good luck for them to trample all over you and shatter your bones. You’d think being put in a wheelchair for the rest of your life is the opposite of good luck, but hey, different strokes for different folks.

Speaking of cows in India, get a load of this half man half cow hybrid that was born in Muzzafarnagar earlier this year. Terrifying.