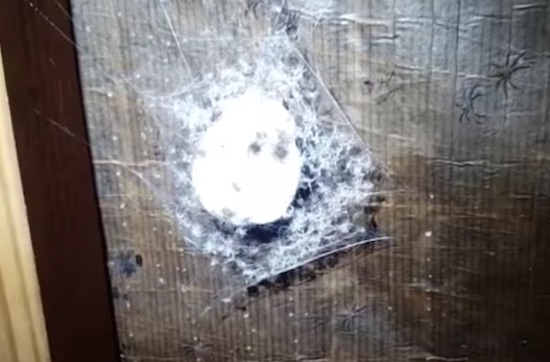 Wait until you see the mother watching over them.

It’s well documented that Australia is all kinds of nope when it comes down to spiders and all different types of creepy crawlies, but they still manage to up the bar almost monthly with videos like the one you can see below.

The video is taken from the visit of an exterminator to someone’s house in Kholo, Queensland. Here’s what they had to say about what was going on:

During a termite inspection for a client, I noticed a large Huntsman spider, which isn’t all that unusual for these parts.

What was unusual was that it didn’t scurry away because it was standing guard over a recently hatched egg case with a large number of hatchlings around the nest.

For the record, these spiders are beneficial in keeping down the numbers of other pests and venomous spiders, so this spider and her babies are still living, helping me by removing other unwanted pests from my client’s home.

Now you know what’s going on in this video make sure you want to click on it before you do because it’s seriously terrifying and that mother is gonna make you jump when she appears on the screen then quickly scuttles off, guaranteed. You’ve been warned:

Yikes – this was like some of the scariest parts of the new Resident Evil eh? Those spiders make you feel so icky don’t they, like they’re already all over you because they’re scuttling about so fast and you don’t know where they might have ended up.

Can’t believe this guy is just sitting there calmly filming it, especially when that big one is just lurking there waiting to pounce. No way.

For more Huntsman spiders, check out this one that’s the size of a human head. No, no no.