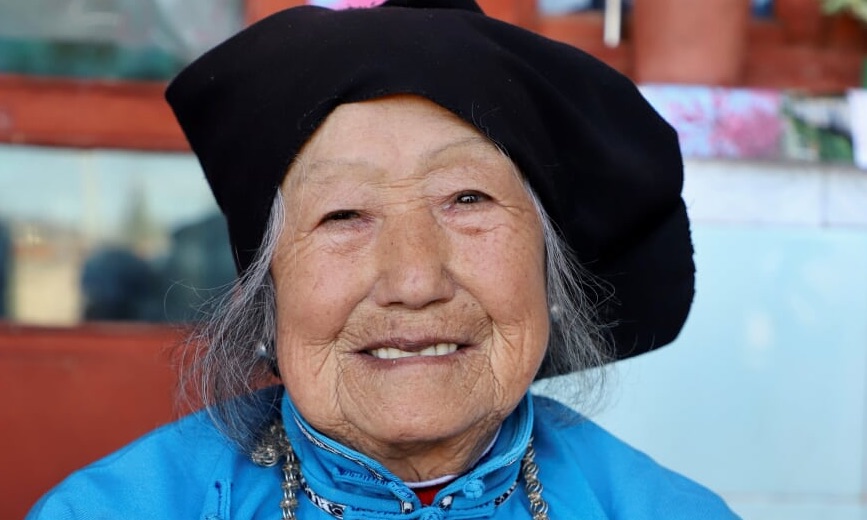 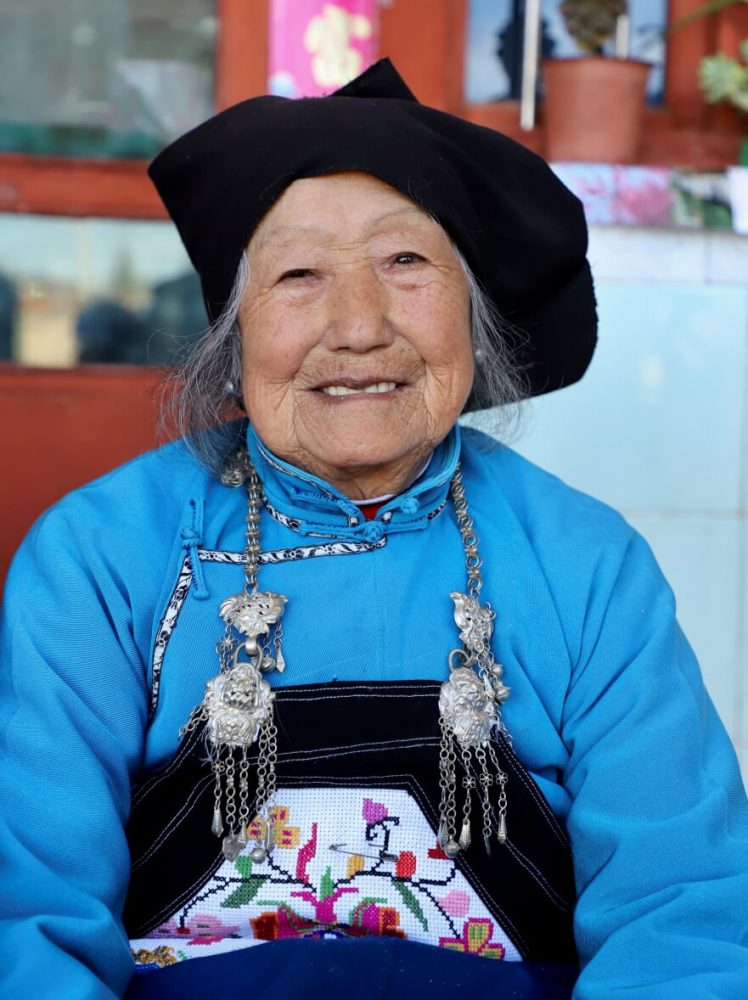 Most mornings I wake up get washed and dressed and then take a walk for about 20 minutes to work for a couple of hours at my son’s shop. He owns one of the oldest houses in the village and attached to the side is the shop.

I am 79 but this year I am turning 80. I find that working a couple of hours keeps me active not only physically, but also mentally.The shop isn’t so busy so it’s not hard work and I mostly sell snacks to children before school and during their lunch break.

After I’ve finished work I normally spend the rest of the day relaxing with the other ladies in the village. Many of these ladies also have bound feet. I started to bind my feet at the age of around five but I don’t actually think my feet are that small compared with other ladies I know, knew or have met.

It was ever so painful making them small but luckily there isn’t any pain now. There was no blood during the process but the process did break the bones in my feet. At that time I didn’t really care about the pain, there wasn’t much I could have done anyway.

I wanted to make my feet small. I like small feet and I wouldn’t want them to be any bigger. I think the smaller the feet the more beautiful you are.

My mum had bigger feet than me, my feet were smaller which was a good thing as it was easier to find a husband – the smaller the better she would also say. I still bind my feet now, which is quite a hassle but keeps my feet small and comfortable. 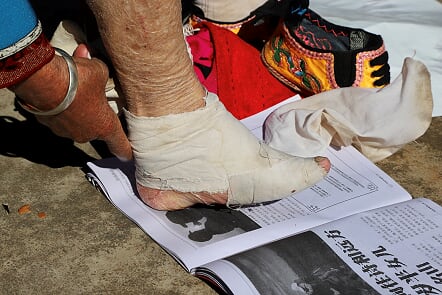 I sleep still with my feet bound and every two days I will clean them well and wrap them up again. It’s pretty tiring but I have no choice.

My children don’t really know how to care for my feet, they don’t know how I bind them but my grandson does. He treats me so well.

A couple of years ago he took me to Beijing to visit. We spent 6 days there with a tourist group and we went to some famous sights around the city, we went on a boat trip which was fun and we climbed the Great Wall!

I really liked Beijing and I want to go back but spending 6 days there all at once was enough. My son was worried about me going to Beijing as it’s far from my village but my grandson kept me safe and we had a wonderful time.

He helped me clean my feet and cut my toe nails otherwise I would have been in pain. I think the food in Beijing was pretty bland so I came prepared.

I bought a bag of dried chilli that I would take out at meal times. I quite like to eat spicy food and in fact there isn’t much I don’t like to eat. 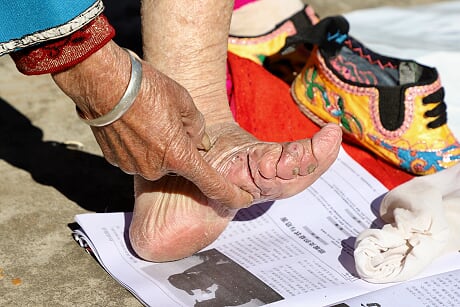 I flew to Beijing and enjoyed flying, I wasn’t scared at all. I enjoyed sitting there and looking out the window and thinking how small everything was below us.

The only thing that scared me in Beijing were the elevators, I really didn’t like getting in them but all the buildings there are so tall so we had to use them as I can’t climb so many stairs. In Beijing many people were very interested in talking with and taking photos of me.

I don’t think there are many old ladies with small feet left in Beijing or China so when people see a lady like me they are very curious – Chinese and foreigners alike. Previously people have wanted to take photos of me and my feet but I always told them to stop if I didn’t look my best but they always told me I look beautiful.

People would run as fast as they could to get in front of me to take a photo. I didn’t really mind them taking photos though they always seemed happy to see me and were polite and kind even if we couldn’t understand each other at times.

They were not only interested in my feet but also my clothing which I have worn for as long as I can remember.

When I was younger there were a few foreigners who visited our village they came to tell us that we can no longer bind out feet. I don’t know where they were from but we didn’t listen to them anyway. When they were here we took off the bandages and told them we would stop but as soon as they had gone I wrapped my feet back up. 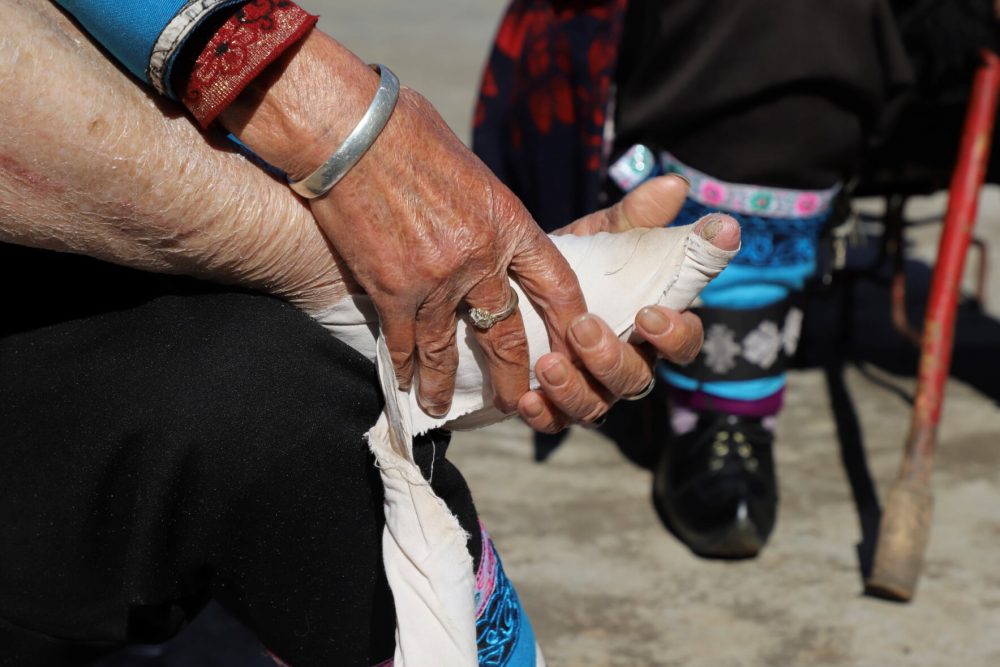 I married at the age of 16 and my husband was 10 years older me which, I wasn’t happy about. I didn’t want to marry a man that much older than me but my mother told me to trust her, she told me he was a good man and I believed what she told me.

After all she was right, he treated us very well but he has been dead for around 30 years. When we married his family gave my parents 20 yuan, which was really a lot of money back then and some food. Then he took me to his village where I still live today.

My village isn’t too far from here but I didn’t go home often. I was young and a bit scared to leave, I saw my family less and less but I felt kind of happy living with him and his family here.

His mum didn’t have any daughters, she only had sons so she treated me very well. She treated me as one of her own and I really liked her.

Whilst I worked hard looking after our children and growing vegetables my husband was busy making coal like, one of my sons does now. It’s hard and dirty work. 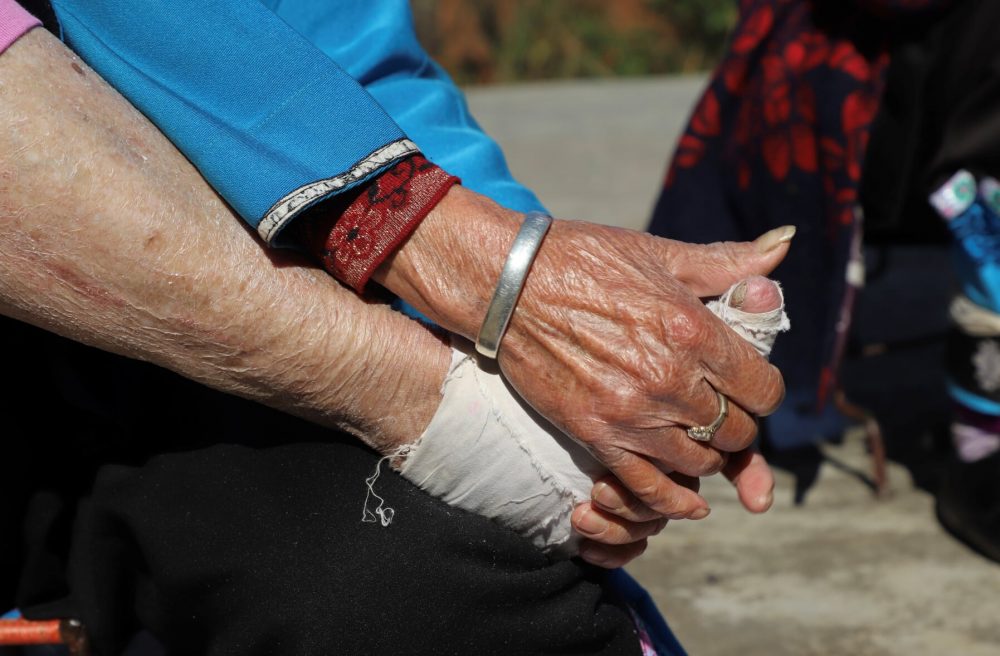 Back then there wasn’t much I couldn’t do. I’d fill up baskets with vegetables which on their own were very heavy but much heavier after it rained and carry them for quite some distance to where they needed to be which, was really hard work but now I am old I can no longer do it. I have pain in my back and hips which might be because of them heavy baskets.

Today, I can still grow some vegetables but not many, my children now grow them near to our house. My husband and I had 6 children – 3 sons and 3 daughters. One of my sons has already passed away which was one of the saddest times of my life. I was also very sad when my husband died.

When I was younger I had no dreams, I just wanted there to be enough food for us to eat but some days there wasn’t. I never had the chance to study and when I was younger we were very poor. We lived in an old house and we used to have the animals living on the ground floor and we would all live on the upper floor.

Around 1958 everyone was given certain jobs around the village and mine was to fix the walls of an old broken lake. This job came without a salary but in those days the government gave food to the people and we all ate together in one place.

Most days I would have to climb the mountains that surround us to try and find wild vegetables for us to eat but even they were hard to find as everyone was looking for the same thing. There was no rice, meat or eggs and the only time we would have some special food would be during Spring Festival. We would be able to eat some white radish which was normally in soup.

I was very unhealthy at times and we would always make sure that the children ate first. Now I feel grateful for what I have and if we all eat together then I will still make sure everyone has eaten well first and when they have I will eat what has been left by my children and grandchildren. 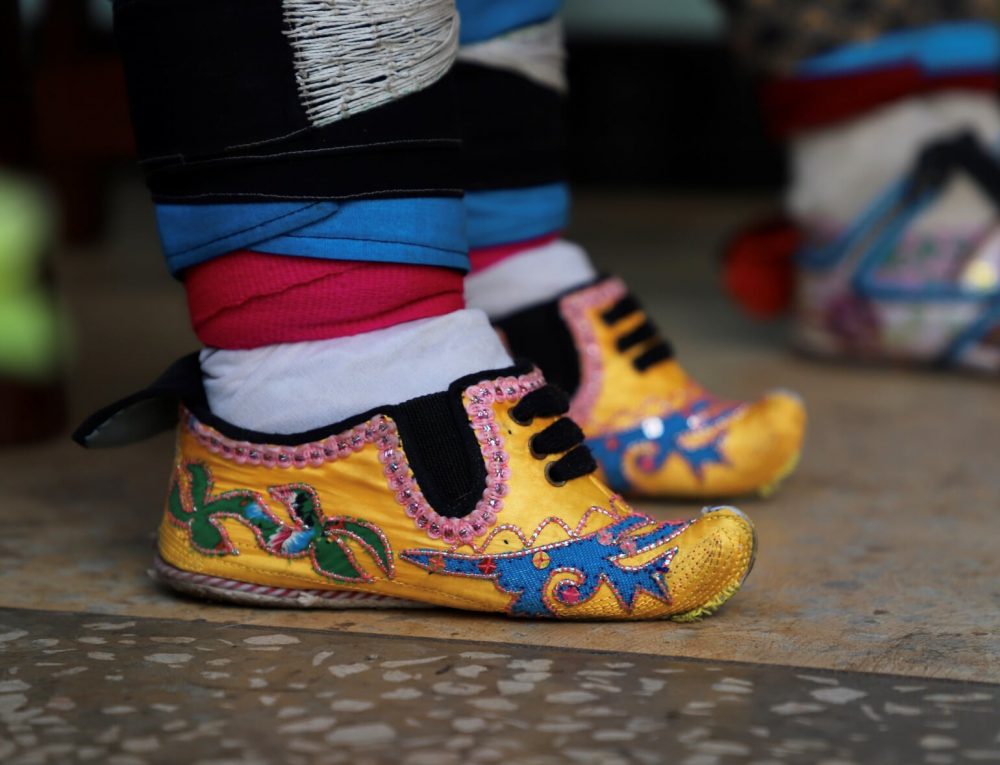 My father died when I was 5 so my mother raised 6 children for the majority of her life alone. The rich people back then used to own a cart and a water buffalo to help farm and sometimes we’d help them too. We used to ride the cart to the top of the hill, turn it around and then race the cart back down. The buffalo could move really fast and that was how we had fun.

My mother taught me how to sew and make shoes and clothes. When my children were little I used to make these traditional kinds of clothes for the girls to wear. When I was a little girl though our clothes were never this beautiful.

I am not scared of dying because I am very prepared. I believe that when you die you move over into a new life and the things you use in this life you still need to use in the next. In the next life I will wear these clothes and I will still have bound feet so I have made a lot of aprons and little shoes for my family to burn and pass them to me when that time comes.

Spring Festival is a happy time for me. Before my family come I will clean the house, change the bed sheets and wash clothes. I love the time when everyone comes home. The house is really lively and I can see my family all in the same place.

There is singing and dancing and a lot of delicious food. I miss my grandson though and this is a time he comes home to visit. I am a little worried as he isn’t married yet and I really want to see him find a good wife. I know he is still quite young but I am getting older. I want to meet any great-grandchildren before I die.

Apart from that I want to visit Hainan and I want to stand in the ocean. 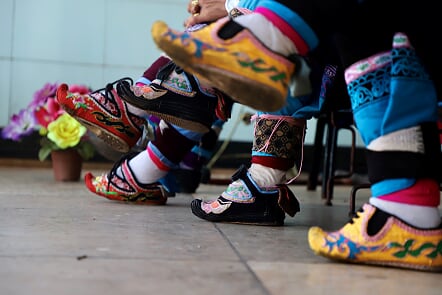