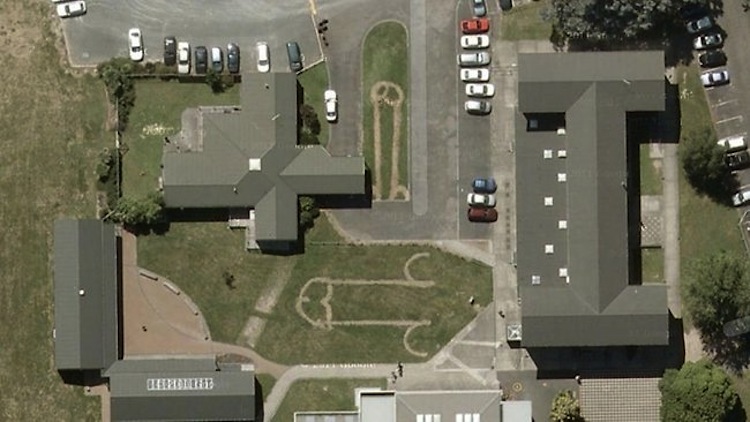 The ultimate high school prank is immortalised forever thanks to the good people at Google.

I featured how cool Google Maps was when I talked about the 9 eyes project a couple of months ago, but this one possibly stumps all the pictures on there, at least in terms of hilarity. In fairness though that was talking about Google Streetview and this is just a plain old Google Maps picture. It turns out that when the satellites were taking pictures of Hamilton New Zealand in 2009, it just so happened to coincide with a massive prank that was played on Fairfield College in which the pranksters burned huge 15m (50 foot) dicks into its ground using weedkiller. You can only see two on this picture but apparently at the time there were as many as six huge dicks all around the campus. You’ve gotta admit that’s pretty funny, and it must be pretty hilarious when you’re just checking Google Maps and see two huge dicks burnt into the ground of some building….. 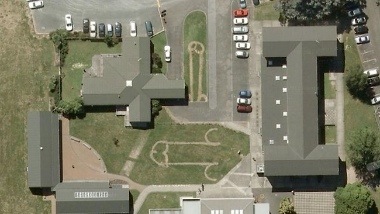 Apparently the dude who discovered it, one David McQuoid (McQuoid – is that even a real name?), was looking for property in the area when he discovered it, and at first thought it was a large piece of artwork. Really?? At first??? Surely you just thought it was two huge dicks at first. Or maybe two medium sized dicks considering you might have forgotten the context as you were so shocked to see them. The principle of the school – one Gerhard van Dyk (stupid names in this part of New Zealand right?) – said he would be contacting Google to see if the huge dicks could be removed from the Google Maps image of the area. He also admitted that the pranksters had never been caught and that at the time of the prank one dick would emerge per week somewhere on campus for a six week period, and they never knew where it was going to show up and couldn’t really do anything about it. Apparently the best solution they came up with was for the caretaker tried to hide it by putting some extra weedkiller down. Great plan guys! Sounds like these guys got completely pranked! Sick Chirpse.