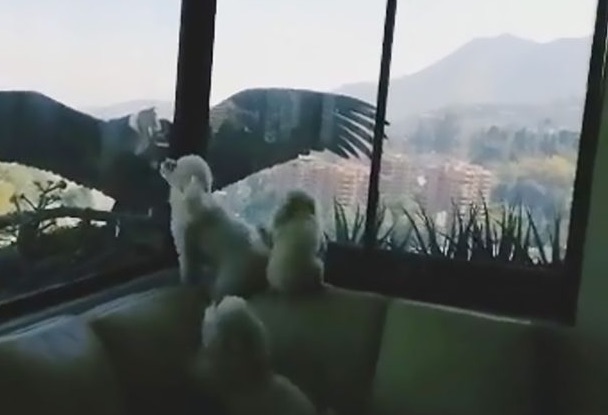 It’s crazy out there.

Bet you didn’t think that gigantic condors in Chile were going to be affected by COVID-19 did you?

Here we are though, as TikTok videos uploaded by user Gabriela Leonardo in the Chilean city of Las Condes seem to imply that condors in the city are starved as food and are turning their attention to Gabriela’s poodles. Fortunately, they’re trapped behind the window of Gabriela’s apartment and the condors can’t get their claws into them, but you kinda get the feeling that there would be a very different outcome to this video if the glass wasn’t in the way:

Geez. Surprised those poodles aren’t completely shitting themselves and hiding under the couch from those gigantic birds trying to rip them to shreds, but I guess they probably live a pretty mollycoddled life up Gabriela’s ivory tower there.

In case you’re wondering of the likelihood of the condors actually eating the poodles, it could actually happen. They usually prefer to eat carrion but there have been cases of them hunting hunt small live animals, such as rodents, birds, and rabbits, so you could definitely see them graduating up to poodles if their hunger demanded it. Try and stay away from them if you see any in Chile.

For more of the same, check out this guy who found a whole bird in his Tesco salad. Jesus.