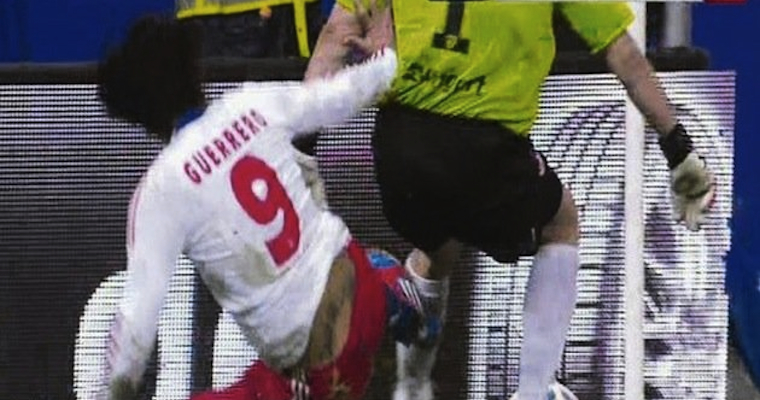 It didn’t break any bones but it’s a pretty gross tackle from Paolo Guerrero.

I don’t know much about Paolo Guerrero at all, except that he’s from Peru and plays in Germany for Hamburg but he seems like a nasty piece of work judging by this video. I don’t think I’ve ever posted a video of a horror tackle before on Sick Chirpse (what’s the point? Most aren’t actually that horrific, except ones like the Eduardo injury or the Luc Nilis injury) so it’s gotta be pretty special to feature on here. In fact, it was deemed so horrific that the German FA has banned Paolo Guerrero for 8 games! That’s as many as Luis Suarez got banned for for being a racist! Which is a more heinous crime? Racism or tackling? I guess apparently they’re equal, at least in the eyes of the FA.

The action in this video picks up when Hamburg are 3-0 down to Stuttgart at home (losers) when a long ball gets kicked into the corner. For some reason the Stuttgart keeper decides to run over and shepherd it out – I guess that’s not that abnormal a reaction to that move, but I bet the keeper regretted it when he got crocked by Paolo Guerrero. It’s a seriously gross tackle, I don’t think I have ever seen anything like it. He should probably be banned for life, let alone 8 games. Pablo Guerrero made absolutely no attempt to go for the ball and looks more like he’s intentionally trying to take the keeper out, kind of like on old FIFA games where you used to be able to slide the keeper when he was holding the ball.

Check it out below, OUCH!

Turns out Paolo Guerrero has been a bad egg for a while now – in April 2010 he was fined 100,000 Euros by Hamburg and given a five day ban for throwing bottles into the crowd after he was allegedly verbally abused by a Hamburg fan. What a dickhead. Pretty sweet shot though: