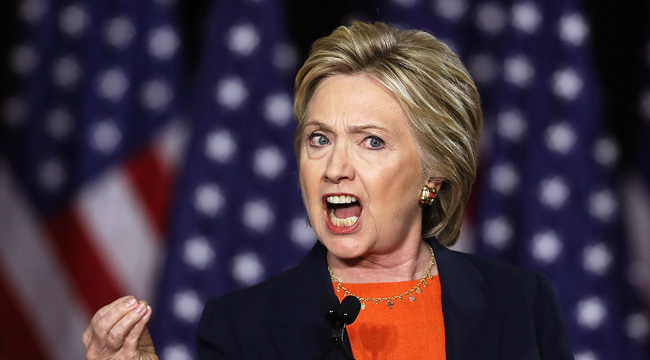 Hit him where it hurts.

The whole world was having a big old LOL yesterday morning when Donald Trump posted out a tweet saying ‘Despite the constant negative press covfefe’ which wasn’t deleted and made him and his staff look like even bigger bumbling buffoons than usual.

And pretty much everyone in the whole world decided to throw shade at him about it, even his great rival Hillary Clinton who normally acts fairly dignified in these situations. Late last night, Trump decided to diss Hillary Clinton after she claimed that her private email server was a “nothing burger” that cost her the election (her words not mine):

Crooked Hillary Clinton now blames everybody but herself, refuses to say she was a terrible candidate. Hits Facebook & even Dems & DNC.

To which Clinton had the following cutting response:

Unfortunately, Trump himself doesn’t seem too bothered about the fact he sent out an embarrassing mistyped tweet that was allowed to stay on the internet for six hours with nobody taking it down. Instead, he just laughed about it and posted this when he woke up and realised his mistake:

Who can figure out the true meaning of "covfefe" ??? Enjoy!

Which is kinda a good way to get out of looking like an idiot in fairness. There’s also the fact that Donald Trump is the President Of The United States and Hillary Clinton lost the election to him, which is probably something that she’s never going to live down or get over, much like the entire planet. Think Trump is always gonna have the last laugh – I’ll give you props for your Twitter game though Hillary sure.

Oh and Trump also followed this up by announcing that the US was going to pull out of the Paris climate deal. Can’t really beat that for a burn either. Ugh.