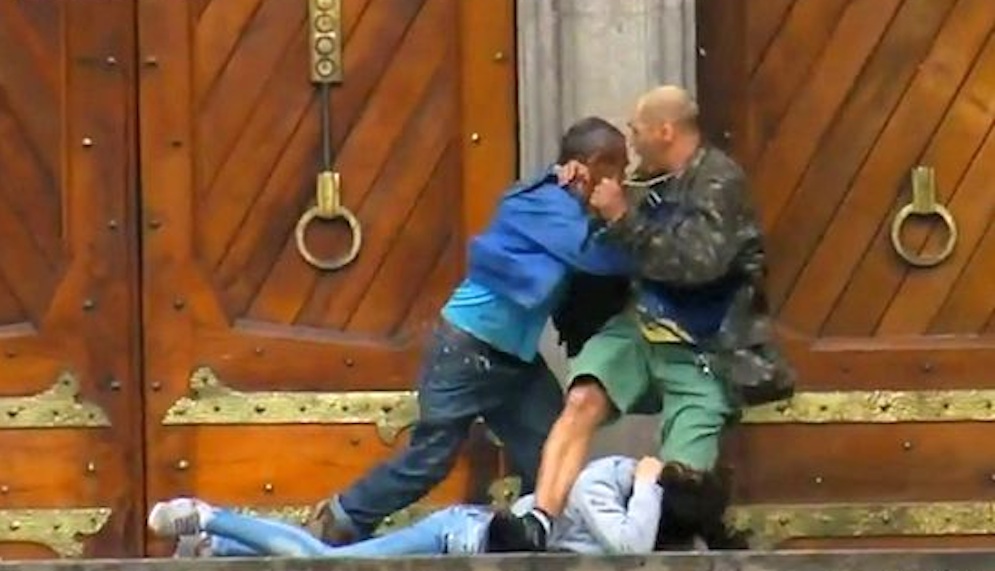 Over in Sao Paulo over the weekend there was a situation on the steps of their cathedral when a 49 year old man named Luiz Antonio de Silva took a woman hostage there.

A church security guard said that the pair had been arguing inside the church earlier that day and that she wanted to leave but de Silva wouldn’t let her. He then grabbed her arm and started assaulting her on the steps of the cathedral.

A 61 year old homeless man named Erasmo Francisco Rodrigues de Lima then tried to interfere and help the woman, which led to a scuffle between him and de Silva. To everyone’s surprise, de Silva reacted to this by pulling out a goddamn gun and shooting de Lima in the chest. The cops watching the scene’s reaction to this was to spray de Silva full of bullets.

Of course all of this was caught on camera and actually broadcast live as it happened onto television in Sao Paulo. It’s actually pretty dark stuff so if you don’t want to see two people shot dead then don’t watch the video.

But you have to give mad props to de Lima for trying to help out the woman when nobody else would, not even the cops. RIP. As for de Silva, let’s hope he restless wherever he is because he sounds like an absolute scumbag – not only did he shoot someone in cold blood and beat up a woman, but he’s also spent 22 years behind bars for various offences such as theft, damage of property, and causing bodily harm.

For more messed up goings on in Brazil then check out this video of a man putting a tarantula and a snake in his mouth.