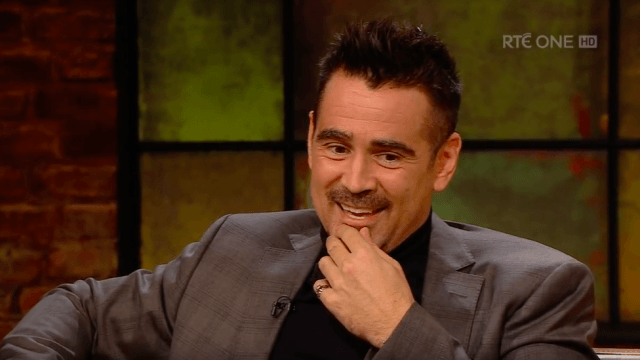 Colin Farrell is probably one of the most famous Irishmen in recent memory, but it could have been so much different for him as he’s recently revealed that he almost ended up as one of the members of Boyzone.

Farrell was appearing on The Late Late Show on Friday night where he made the surprising revelation:

I’m getting this band together and it’s gonna be great, and you’d be wonderful.

I was wearing a tight rubber t-shirt and leather pants, so I was ready to come on and impress Gay [Byrne, the former host of the Late Late Show].

I went up and I got my picture taken with a couple of the boys, with Shane Lynch and Mark Walton, who was one of the original members. I got my picture with the two of them boys, wearing a bandana, full of the joys of life, talking shit didn’t stink and I sang ‘Careless Whisper’.

Terrible tune coming out of this mouth, murdered it. It was so bad that they asked me, ‘Could you do that a sec… could you do that again?’ And I sang it a second time and I didn’t feel great about myself  afterwards and I went home afterwards… and the phone rang and my mother said Louis Walsh was on the phone for me.

It was at the bottom of the stairs so I took the phone and he went, ‘Look, eh Colin listen, today eh you know, it’s not really… it’s not going to work, you know.

Damn, it could have all been so different for Colin, but I for one am pretty glad he didn’t end up as an alternate version of Stephen Gately. I mean that would have meant that the world was deprived of such masterpieces as SWAT, Fright Night and the second series of True Detective and we can’t be having that, can we? Thank God Colin didn’t know how to sing. Definitely worked out for everyone.

For more of the same, check out the ten worst accents in  film history. Your boy’s in there.